SEOUL, July 1 (Yonhap) -- Labor unions on Wednesday demanded a 16.4 percent hike in the national minimum wage for next year, while employers called for a 2.1 percent cut, presaging a tough negotiation already complicated by the impact from the coronavirus pandemic.

The two sides presented their initial demands during a fourth plenary meeting of the Minimum Wage Commission in Seoul.

Employer commissioners demanded next year's rate be cut 2.1 percent to 8,410 won per hour, citing worsening business conditions due to the coronavirus outbreak and sharp increases in the pay floor since 2018.

"Small and medium-sized business owners have suffered greatly due to the excessive hikes in the minimum wage over the past three years, and COVID-19 is now making things worse," Ryu Ki-jeong, a senior official from the Korea Employers Federation, said during the meeting.

"A recent survey in the business circles showed both minimum-wage workers, and their employers strongly demand a freeze or cut in the minimum wage," he added. 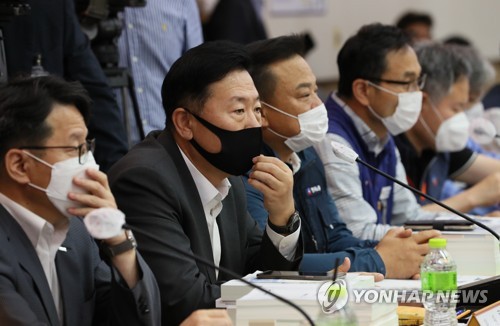 Labor representatives demanded 10,000 won per hour, or a 16.4 percent increase.

Lee Dong-ho, secretary-general of the Federation of Korean Trade Unions, pointed out that even during the financial crises in 1997 and 2008, minimum wage increases were in the upper-2 percent range.

"Even in the COVID-19 situation this year, wage increases at large companies have been set at levels far higher than that level," he said.

"If the minimum wage increases at a lower level than this, workers' lives will get worse and income polarization will expand."

President Moon Jae-in pledged during his presidential campaign in 2017 to raise the hourly minimum wage to 10,000 won by 2020 as part of efforts to boost domestic consumption and reduce income gaps. But he apologized in 2018, when it became impossible for him to keep the promise during his term in office.

The minimum wage negotiation is expected to be tougher this year as both workers and businesses face harsh conditions due to a coronavirus-induced economic slump.

The government last month cut its growth outlook for this year to 0.1 percent from the previous projection of 2.4 percent due to the pandemic.

The commission should reach a decision by mid-July given that the government is required to make a public notice by Aug. 5. The panel has already passed the legal deadline of June 29 to conclude its deliberation.
(END)