The purchasing managers' index (PMI) of the country's manufacturing sector stood at 43.4 last month, up 2.1 points from the previous month, according to a survey by HS Markit.

Yet the June reading was below the 50-point mark that separates contraction from expansion. PMI is a key measure of factory activity in a country.

According to the findings, 35 percent of surveyed South Korean manufacturers said their output declined in June, with only 17 percent reporting increases. 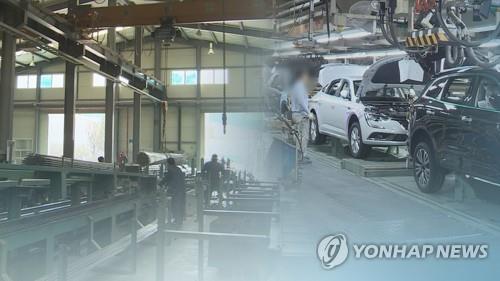 Most of them lowered their capacity utilization rates, and their outlooks for sales took a turn for the worse.

In order to cope with falling utilization, those surveyed companies cut back on hiring new workers, with the June drop in employment similar to the worst-ever level posted in May, IHS Markis said.

South Korea is reeling from the impact of the coronavirus pandemic that has sent its economy into a tailspin due to sinking exports and weaker private consumption.

According to government data announced earlier in the day, South Korea's exports fell 10.9 percent on-year to US$39.2 billion in June, marking the fourth consecutive month of decline.

The novel coronavirus has infected 12,850 South Koreans so far, with the death toll reaching 282.
(END)