In a speech during a forum held in Seoul, Abrams also noted that more work needs to be done for the planned transfer of wartime operational control (OPCON) of South Korean forces from Washington to Seoul.

"Unfortunately, we had to postpone our theatre-level combined post command training this year due to the ongoing global pandemic. While we have been able to conduct important leader development training, that in no way replicates the rigor and realism of our semi-annual theatre-level training events," Abrams said.

In February, Seoul and Washington announced their decision to indefinitely postpone their key springtime exercise due to COVID-19, and discussions are under way to fix the schedule and program for their summertime combined exercises.

"We must continue to conduct combined live trainings ... with rigorous scenarios," the commander said, vowing to further discuss with the South Korean side about ways to maintain a staunch readiness posture.

When and how to stage the annual summertime exercises have drawn keen attention amid heightened tensions with North Korea. The communist nation has long denounced joint drills between the U.S. and the South as a rehearsal for invasion.

Tensions with North Korea escalated sharply last month as Pyongyang cut off communication lines with the South, blew up an inter-Korean liaison office and threatened to take military action in anger over anti-Pyongyang propaganda leaflets flown from the South.

"I believe North Korea will continue to test and refine asymmetrical capability. We should continue to hold them accountable in accordance with standing policies and procedures," Abrams said.

Asked about his assessment about North Korea's recent coercive moves, the commander said the allies have the "brightest intelligence professionals in the world" and have been working with other partner nations on those issues, though no one "should be able to stand up and speak with authority what is on (leader) Kim Jong-un's mind." 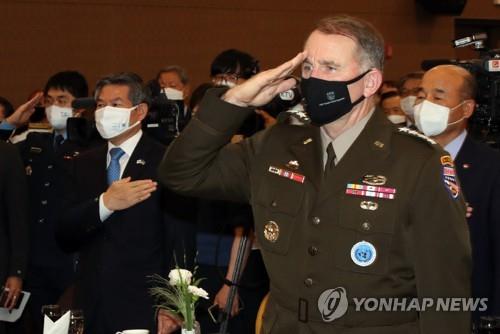 "Significant progress has been made (regarding the OPCON transfer), but much more work remains ahead of us," the commander said.

The conditions are South Korea's capability to lead the allies' combined defense mechanism, its capacity for initial responses to the North's nuclear and missile threats and a stable security environment on the peninsula and in the region.

Asked about the possibility of a U.S. troop drawdown from the Korean Peninsula, Abrams said they are "wildly speculative statements," stressing that the U.S. remains "fully committed to the mission of defense of the Republic of Korea."

Last month, former U.S. Ambassador to Germany Richard Grenell said that U.S. President Donald Trump clearly expressed his hope to bring U.S. troops home from South Korea, Japan and other allies, while confirming the U.S. plan to pull out around 30 percent of its troops, or 10,000 service members, from Germany.

"The enduring alliance forged in the war and strengthened over decades of cooperation and commitment remains the linchpin of our bilateral relationship," Harris said, calling the alliance "one of the strongest and most vibrant in the world."