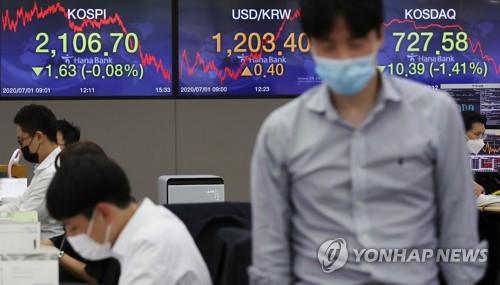 The index got off to a strong start on hopes for an economic rebound but turned south in the afternoon amid concerns over the latest developments in Sino-American political frictions over Hong Kong.

"Despite positive leads from the U.S. economic indices, concerns have been building up over the U.S.-China political tensions," Lee Kyung-min, an analyst at Daeshin Securities, said.

"The index swung to losses in the afternoon following some related events, such as China's complaint that the U.S. is crossing the line over the Hong Kong national security law issue," he added.

Bond prices, which move inversely to yields, closed lower. The yield on three-year Treasurys rose 0.5 basis point to 0.847 percent, and the return on the benchmark five-year government bond added 2.1 basis points to 1.132 percent.