SEOUL, July 2 (Yonhap) -- Hyundai Glovis Co., a logistics unit of Hyundai Motor Group, said Thursday it has obtained a US$432 million deal to deliver vehicles for Volkswagen Group by 2024.

Hyundai Glovis signed a five-year deal with Volkswagen Konzernlogistik GmbH& Co. OHG, the logistics arm of Volkswagen Group, to deliver Audi, Volkswagen, Porsche and Bently brand vehicles under the German carmaker from Europe to China by December 2024, the company said in a statement.

"We have some delivery contracts on the East Asia-North America-Europe routes, but we didn't have enough cargo to carry on our way back to East Asia from Europe. With the exclusive deal from Volkswagen, we have secured stable delivery deals all across the routes," a company spokesman said over the phone. 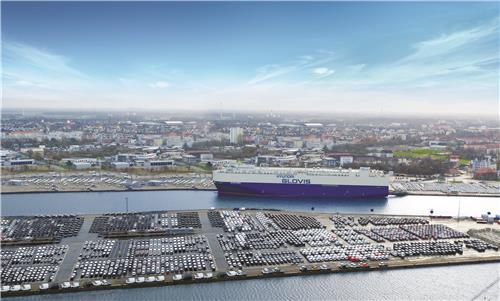 Hyundai Glovis had earned more than half of its sales in the vehicle-shipping business from deals with its affiliates Hyundai Motor Co. and Kia Motors Corp.

But in 2019, the ratio of its delivery deals with global carmakers accounted for 53 percent of sales of 2.05 trillion won ($1.7 billion), the statement said.