SEOUL, July 2 (Yonhap) -- South Korea's renewed effort to revive summitry between the United States and North Korea ahead of the U.S. presidential election in November is raising questions about whether Pyongyang would warm to dialogue amid political flux in Washington.

On Wednesday, President Moon Jae-in expressed his desire to broker another summit between U.S. President Donald Trump and North Korean leader Kim Jong-un before the U.S. election, while cautioning against "rolling back hard-won progress in inter-Korean relations."

Moon made the remarks after tensions flared anew due to the North's surprise demolition last month of a joint liaison office in its border city of Kaesong and incendiary rhetoric that some say appeared aimed at solidifying internal unity and attracting the U.S.' attention.

A new summit between Trump and Kim could create a much-awaited momentum to bring their countries' stalled nuclear talks back on track and help advance Moon's agenda for lasting peace on the divided peninsula. 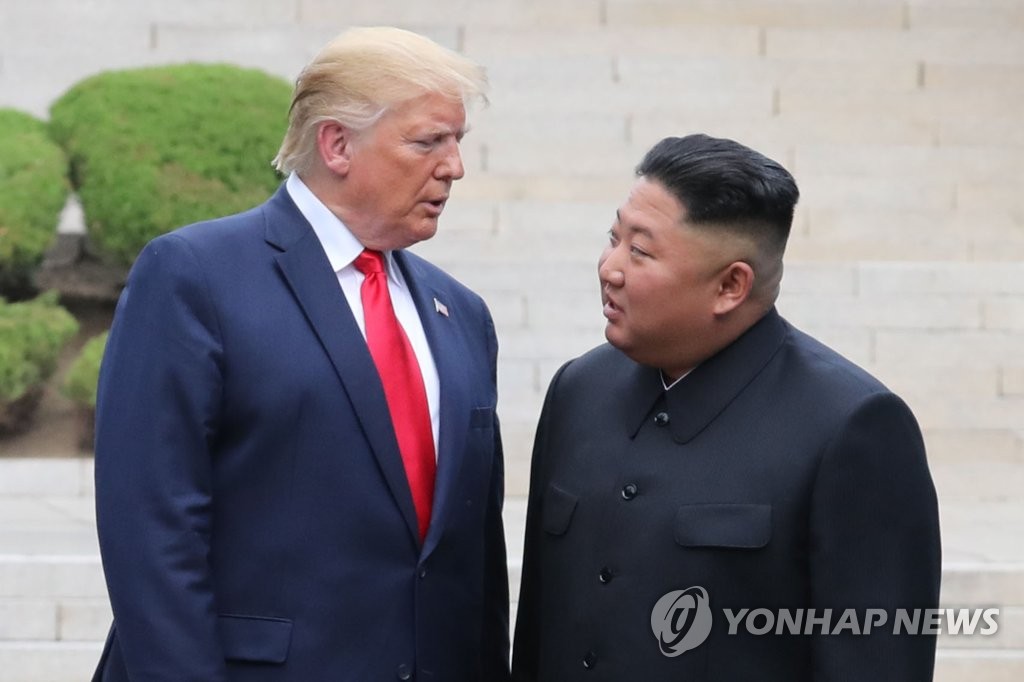 However, questions remain whether Trump can focus on a summit deal with Kim when the U.S. leader is saddled with a host of domestic challenges, including the response to the new coronavirus and his looming reelection battle -- a reason why observers say Trump may seek to simply "maintain the status quo."

Increasingly wary of political uncertainty in the U.S., Pyongyang could also be cautious about resuming top-level dialogue, given that another no-deal summit like the one in Hanoi in February last year could deal a humiliating blow to the image of its dynastic ruler.

"For now, Trump may think he already got what he wanted -- the North's self-imposed moratorium on nuclear and long-range missile tests that could directly threaten the U.S. mainland, and thus he may not be in a rush for another summit," Nam Chang-hee, professor of international politics at Inha University, said.

"On the part of Pyongyang, it may not have much room to think about summitry as it is already struggling with worsening economic hardships. Thus, conditions do not seem to be ripe for a summit," he added.

In a forum on Wednesday, Moon Chung-in, special security adviser to the president, noted that arranging the U.S.-North Korea summit "may not be easy" given that Trump might need to have a "clear card" that he can offer without prompting a domestic political backlash.

On Monday, Stephen Biegun, deputy U.S. secretary of state and lead nuclear negotiator, said that another summit between Trump and Kim is unlikely before the November election, though he reiterated Washington's readiness to reengage with Pyongyang.

Biegun reportedly plans to visit South Korea next week on an apparent mission to renew the U.S.' call for the communist regime to refrain from provocative actions and return to the negotiating table.

His South Korean counterpart, Lee Do-hoon, met Biegun late last month in Washington to coordinate their efforts to rejuvenate the sputtering efforts for peace with the North, after Pyongyang raised tensions with its provocative threats, including military action plans, which were later abruptly suspended.

Despite skepticism over the prospects of a new summit between Trump and Kim, some observers speculated that Trump could be tempted to utilize such a major diplomatic event to ease public criticism over continued reports of COVID-19 infections and deaths, racial justice protests and a pandemic-induced economic downturn.

But it remains uncertain whether the North would embrace such a one-off political stunt as Pyongyang has repeatedly warned against a U.S. diplomatic attempt designed to "suit its domestic political agenda."

The North could also take a wait-and-see approach for the time being amid news reports that surveys of U.S. voters showed presumptive Democratic presidential nominee Joe Biden is ahead of Trump.

"North Korea has been pushing for what it calls a frontal breakthrough, and this means it has been steeling itself for a long-term struggle amid the possibility of change of government in Washington," said Park Won-gon, professor of diplomacy at Handong Global University.

The professor also pointed out COVID-19-related logistical hurdles in arranging the summit venue and transportation as Pyongyang has been making all-out efforts to battle the global scourge.