Lee's trip came shortly after the North blew up an inter-Korean liaison office, and Kim Yo-jong, sister of North Korean leader Kim Jong-un, strongly criticized Seoul for failing to pursue inter-Korean cooperation independently of the U.S. while citing the working group as a key example of such "deep-rooted flunkeyism."

"The foreign ministry assesses -- and so does the U.S. -- that the working group has operated fairly effectively, but we are also aware of domestic concerns about it," Kang said during a press conference.

"I was briefed that at the time of the special representative's visit to the U.S., we shared with the perception of such a problem with the U.S. side and discussed how to improve the way it operates so as to dispel such concerns," she said of Lee's trip to Washington. 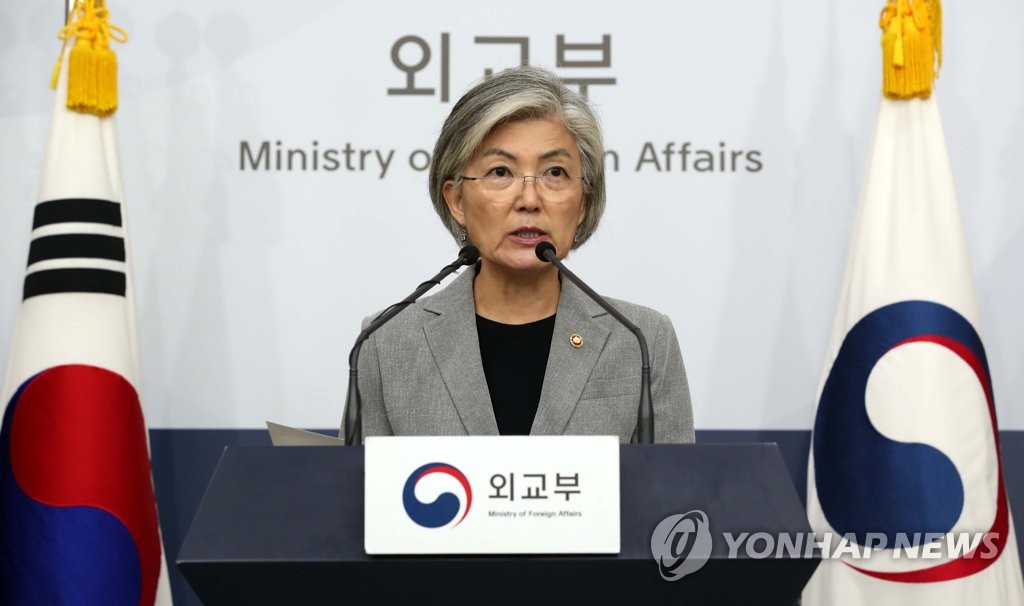 During the press conference, Kang also vowed to make "across-the-board" efforts to set the mood for Pyongyang's return to dialogue.

Kang also noted that Washington has reiterated its readiness to resume dialogue with Pyongyang, as well as its willingness to take a "flexible position."

"The South-North (dialogue) track should go in tandem with the North-U.S. track. Our basic stance is that both tracks should move forward in a mutually reinforcing manner," she said.

In an apparent allusion to the planned trip to South Korea by Biegun next week, Kang said that her ministry is pushing for a "high-level visit" to Seoul this month.

Biegun reportedly plans to visit South Korea on Tuesday, on an apparent mission to renew the U.S.' calls for North Korea to refrain from provocative acts and return to the negotiating table.

Touching on the efforts by Seoul and Tokyo to address their protracted row over Japan's export restrictions and wartime forced labor, the minister said that "gaps" between the two countries are big.

"We think that through dialogue, we have broadened the depth of mutual understanding, but differences are still big, and the issue of Japan's export restrictions has yet to be resolved," she said.

Kang also reaffirmed that Seoul and Washington did not discuss a U.S. troop drawdown during their negotiations over how to share the cost of stationing the U.S. Forces Korea under a deal, called the Special Measures Agreement.