In a letter sent to Eastar on Wednesday, Jeju Air called on Eastar to pay off all of its debts estimated at up to 100 billion won (US$83 million), including unpaid wages to its employees, delayed payments to subcontractors and office operating expenses, by July 15, a tall order that cannot be met by cash-strapped Eastar Jet.

"We sent a letter to Eastar yesterday to demand overall debt payments in the following 10 working days. Unless Eastar meets our requirements, we could notify them that the deal is no longer valid," a Jeju Air spokesman said over the phone.

But the company did not clarify the value of the unpaid debts.

"Jeju Air just asked Eastar to pay off all the debts that were generated since March, without stating the value of debts we have to settle," Kim said.

If Jeju Air does not accept Eastar's explanation, the acquisition deal is widely expected to be scrapped. 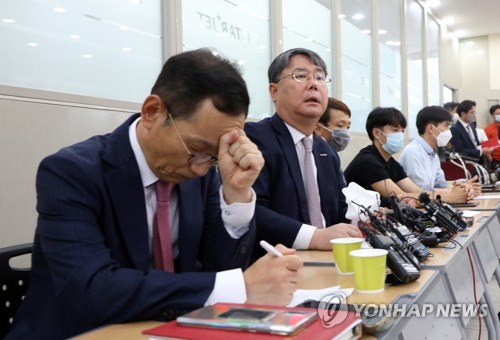