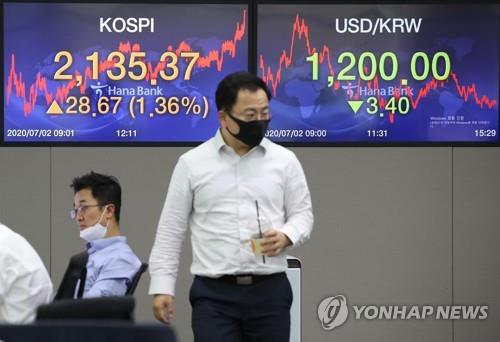 The sharp increase in the KOSPI was largely attributed to improvements in U.S. economic indicators that helped ease investor concerns over the global resurgence of COVID-19 infections.

The U.S. manufacturing data from the Institute for Supply Management (ISM) jumped to a 14-month high, only two months after crashing to an 11-year low.

"The results of easing lockdowns in the U.S. turned out impressive. After the easing of lockdowns, the ISM manufacturing index in June and the ADP's corrected payroll report signaled some improvements," said SK Securities analyst An Young-jin.

Pharmaceuticals fared strong, apparently taking a cue from the progress made in the early trial of an experimental COVID-19 vaccine from U.S. drugmakers Pfizer Inc. and BioNtech.

SK Biopharmaceuticals Co. Ltd., the largest IPO offering of the year so far, skyrocketed 29.59 percent to 127,000 won on the day of its debut.

The local currency closed at 1,200 won against the U.S. dollar, up 3.40 won from the previous session's close.

Bond prices, which move inversely to yields, closed higher. The yield on three-year Treasurys lost 1.6 basis points to 0.831 percent, and the return on the benchmark five-year government bond retreated 1.8 basis points to 1.114 percent.