The relations between the two neighbors are at their lowest ebb in decades amid diplomatic and trade rows stemming from renewed disputes over Korean victims of wartime forced labor during Japan's colonial rule from 1910-45.

"The relationship between Korea and Japan has been catastrophic, but the two governments have not been able to find a breakthrough," the Korea-Japan Reconciliation and Peace Platform said in its inaugural statement.

"We are going to create a platform to turn this crisis into a new opportunity and open an era of peace and co-prosperity in East Asia," it added.

Its launching ceremony was held in both Seoul and Tokyo. The event had been originally scheduled to be held in Tokyo on Feb. 28 but was postponed due to the coronavirus pandemic. 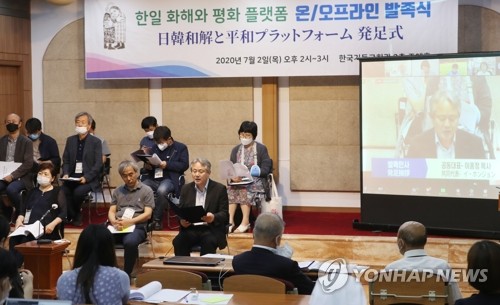 The group will mainly work to promote correct understanding of the two countries' shared history and help heal wounds of victims.

It will also campaign to support the Korean peace process and maintain the war-renouncing Article 9 of the Constitution of Japan, as well as pursue the denuclearization of East Asia and a common vision of peace for the Asia-Pacific region.

Another priority is the education of youth in both countries on peace and human rights, the group said.

"Korean and Japanese religious and civic groups should become peace mediators to break down the barriers created by Japan's colonial era and the Cold War division and lead the Korean Peninsula and Northeast Asia on the path of healing, reconciliation and peaceful coexistence," Lee Hong-jung, a senior official of the NCCK and one of eight co-leaders of the new alliance, said during the launching ceremony.
(END)