SEOUL, July 2 (Yonhap) -- The number of schools closed temporarily due to the coronavirus outbreak rose to 522 nationwide Thursday, the biggest number over the past month, authorities said, as virus infections have been spreading among students and school personnel in Daejeon and Gwangju lately.

The Ministry of Education said 2.5 percent, or 522, of the nation's 20,902 kindergartens and elementary, middle and high schools suspended in-person classes as of 10 a.m., marking an increase of 475 from the previous day.

It is the biggest number of school closures since June 2, when 534 schools were shut down due to COVID-19-related fears. 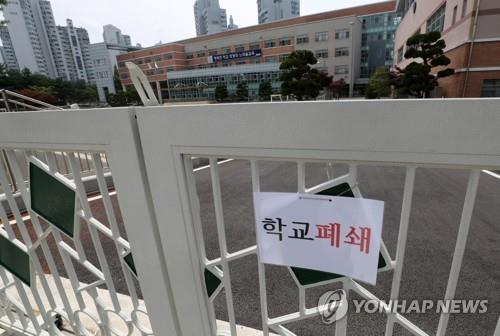 In Gwangju, 330 kilometers south of Seoul, all 438 elementary and secondary schools shifted to online classes under a two-day temporary closure order that will last until Friday, as the southwestern city had reported a double-digit number of new coronavirus cases earlier this week. The city reported 22 new cases Thursday, raising its total caseload to 78.

Elsewhere, five schools in Gyeonggi Province were shut down, followed by three in Seoul, three in South Chungcheong Province and one each from Daegu, South Jeolla Province and North Gyeongsang Province.

Since in-person classes resumed at domestic elementary and secondary schools on May 20, 32 students had tested positive for the virus as of Wednesday, up two from the previous day, with the number of infected school personnel remaining unchanged at nine.