SEOUL, July 2 (Yonhap) -- Two American service members had been briefly released from quarantine even though they tested positive for the new coronavirus because their test results were recorded as negative due to an administrative error, the U.S. Forces Korea (USFK) said Thursday.

The two service members arrived at Osan Air Base in Pyeongtaek, just south of Seoul, on a U.S. government-chartered flight on June 17, and they were moved to separate places in Osan, as they tested negative for the first test and entered quarantine.

On the second test required before exiting quarantine, the results were recorded as negative due to "an administrative error" and led to their release, even though they actually were positive, according to USFK.

Officials found the error around nine hours later and then transported the members to Osan's isolation facility designated for confirmed cases, it added.

"Osan public health and base officials completed contact tracing and thorough cleaning of the facilities visited by the service members," USFK said, adding that it is "collaborating with local public health authorities and the KCDC to share information and discuss response measures."

The latest confirmed COVID-19 cases brought the total number of infections among the USFK population to 42.

Meanwhile, USFK Commander Gen. Robert Abrams designated South Korea's southwestern city of Gwangju off limits to its troops, their family members and all other people who work for the U.S. military, due to the rapid increase of confirmed cases in the region. This advisory was posted on the USFK's Facebook account Thursday.

Access to the Gwangju region is possible only upon the authorities' direction, the U.S. military said, adding that it will continue to assess the situation.

Gwangju has seen a surge in the number of infections over the past couple of days. Of 50 new cases reported Thursday across South Korea, 22 were identified in Gwangju, following 12 infections the previous day. 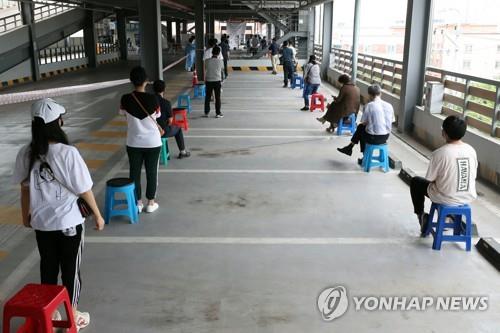