"The pace of COVID-19's spread in Gwangju has taken a serious turn. ... (The city) must wisely overcome the crisis to become a model case," Chung said during the meeting held at Gwangju's city hall. 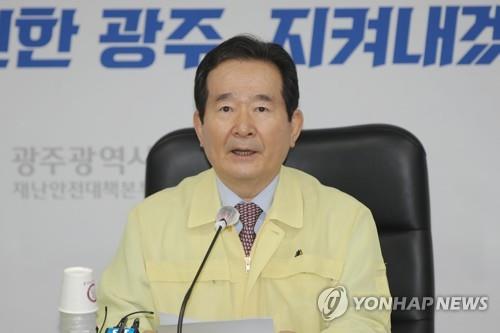 The regular virus-response meeting chaired by the PM has been mostly held in Seoul so far, but the Friday session was convened unusually in Gwangju, 330 kilometers southwest of Seoul, after the city reported an alarming increase in virus infections in recent days.

Daily new infections in Gwangju with 1.5 million population soared to 22 out of the nation's total of 54 on Thursday after the city reported its first double-digit daily tally the previous day, according to the Korea Centers for Disease Control and Prevention (KCDC). The number dropped to six on Friday, but the Thursday figure accounted for the biggest regional outbreaks for the day, surpassing those reported in the Seoul metropolitan area.

"Cases in Gwangju originated in door-to-door retail companies and religious institutions where close contact (between people) is frequent. The virus is now spreading through various channels mainly because of failure to abide by quarantine guidelines," Chung told the meeting.

The prime minister said Gwangju citizens' cooperation with the government's quarantine efforts is "desperately needed," urging residents to stay away from public gatherings and places prone to virus transmissions.

The city also shut down all of its schools through Friday, turning classes into remote learning from home.

The prime minister also voiced concerns over the recent global resurgence of the virus.

"Through frequent (infection) risk evaluations of each country, the government will promptly respond to (the resurgence) with restrictions of visa issuance or flight schedules for countries with higher risks," Chung noted.