SEOUL, July 3 (Yonhap) -- The National Assembly on Friday passed a 35.1 trillion-won (US$29.3 billion) extra budget to combat the continuing new coronavirus outbreaks here and the economic fallout from the pandemic.

The supplementary COVID-19 response budget was passed at the chamber's plenary session, supported by 179 out of the 187 lawmakers present for the voting. The approved budget is 200 billion won less than what the government proposed to the chamber in early June.

The special budget's parliamentary passage was led by the ruling Democratic Party (DP) despite a boycott by the main opposition United Future Party (UFP), which accused the DP of constructing the budget in a "sloppy" manner.

UFP lawmakers did not show up for the budget's plenary session in a sign of protest against the supplementary budget after they boycotted the bill's review by standing committees.

Taking issue with the unilateral review process, the minor left-wing Justice Party, which controls six of the 300 parliamentary seats, abstained. 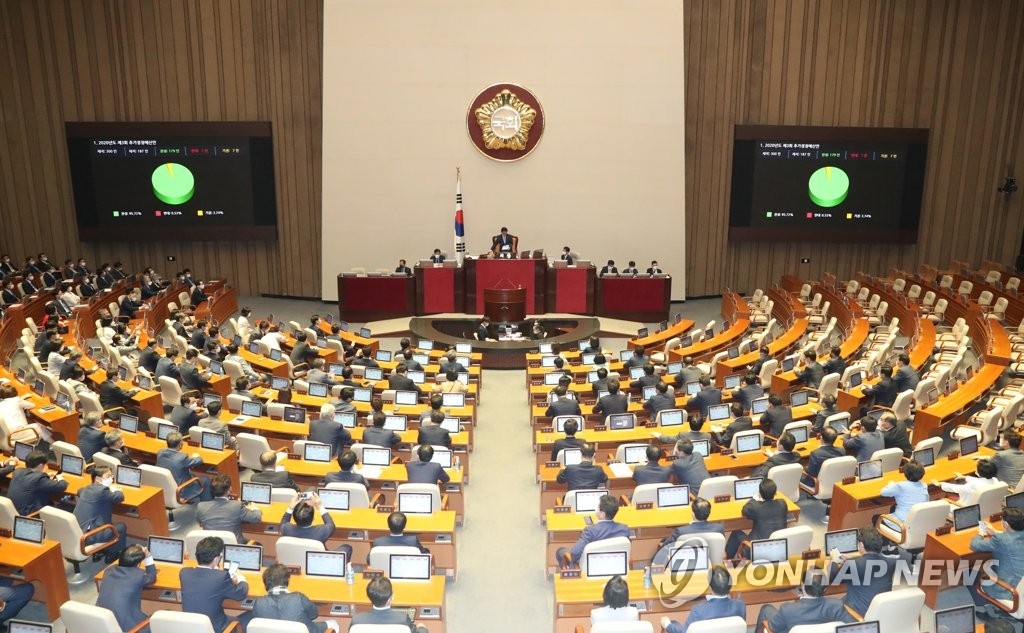 This marks the latest and biggest of the three extra budgets South Korea has passed to contain COVID-19 and the economic slowdown caused by the pandemic.

It is also the single biggest supplementary budget approved, surpassing the 28.4 trillion-won extra budget passed in 2009 amid a global financial crisis.

On Friday, South Korea reported 63 new daily coronavirus infections, the most in two weeks, according to the Korea Centers for Disease Control and Prevention (KCDC). With the daily addition, the country's total caseload rose to 12,967.

Weighed down by the virus outbreaks, South Korea's economy contracted 1.3 percent in the January-March period from the previous quarter, the worst quarterly drop since the final quarter of 2008, when it shrank by 3.3 percent.

In a bid to further cushion the economic blow from the pandemic, the government plans to spend more than 75 percent of the approved budget within three months.

"Through the three rounds of extra budget, the government plans to issue a total of 97.7 trillion won in state bonds this year alone ... turning the burden (of repayment) entirely to future generations," the lawmakers claimed.

Compared to the government's proposal of the budget, the approved budget has 436.7 billion won more earmarked for health, welfare and employment projects.

Meanwhile, the business and energy sectors had a total of 353.5 billion less earmarked for them.

The budget's parliamentary passage came nearly a month after it was proposed to the National Assembly.

The budget bill had remained untouched at the chamber for more than three weeks amid bipartisan wrangling over the formation of parliamentary standing committees for the new assembly whose term started on May 30.

Addressing the Friday plenary session at the beginning, Rep. Lee Eun-ju of the Justice Party said, "The ruling party's unilateral processing (of the budget) worth 35.3 trillion won can hardly avoid criticism."

She said the main opposition party is as accountable as the ruling party after it failed to solve the issue through negotiations.