SEOUL, July 4 (Yonhap) -- A South Korean shelter for surviving victims of Japan's wartime sexual slavery is set to be closed as the last resident has recently left the place, the operator of the shelter said Saturday.

Surviving victim Gil Won-ok, 92, left the shelter on June 11 to stay at a church operated by her 61-year-old step son and priest Hwang Sun-hee, according to the Korean Council for Justice and Remembrance (KCJR), a nongovernmental organization working for South Korea's "comfort women."

The KCJR said it has yet to decide when to suspend the shelter in Mapo, western Seoul, and return it to Myungsung Church, which owns the building.

The planned shutdown comes as the head of the shelter was found dead at her apartment in Paju, north of Seoul, early last month.

The death comes amid an on-going controversy at the KCJR, sparked by a prominent victim's allegation in May that Rep. Yoon Mee-hyang, former leader of the group, misused donations and exploited the victims for her political ambitions.

Comfort women is a euphemism for the victims who were forced to work in Japanese front-line brothels during World War II when Korea was a Japanese colony. 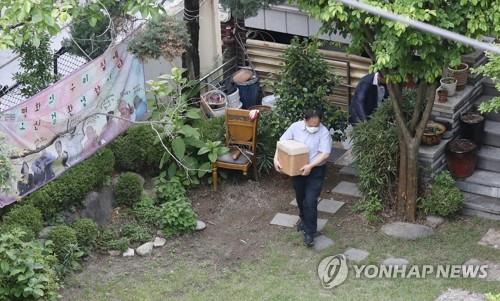 Shelter for comfort women set to be closed following scandal

Shelter for comfort women set to be closed following scandal