SEOUL, July 5 (Yonhap) -- South Korea is set to carry out a critical ignition test for the first-stage engine of its locally built space rocket later this year, a senior researcher at a state-run aerospace institute said Sunday.

The KSLV-2, or Nuri rocket, is a three-stage rocket that has a 300-ton thrust first-stage engine, a single 75-ton second-stage engine and a 7-ton motor for the third stage. The engines use kerosene and oxidizers as propellant to send the 47.2-meter-long, 200-ton rocket into space.

"So-called cold-run tests -- a process of checking the 300-ton thrust rocket without actually igniting the fuel -- as well as making certain that all key systems, like communication links, as well as the newly built launch pad, are functioning normally will be examined repeatedly in the coming months before the actual live fire test," the expert told reporters at an event hosted by the Korea Science Journalists Association. 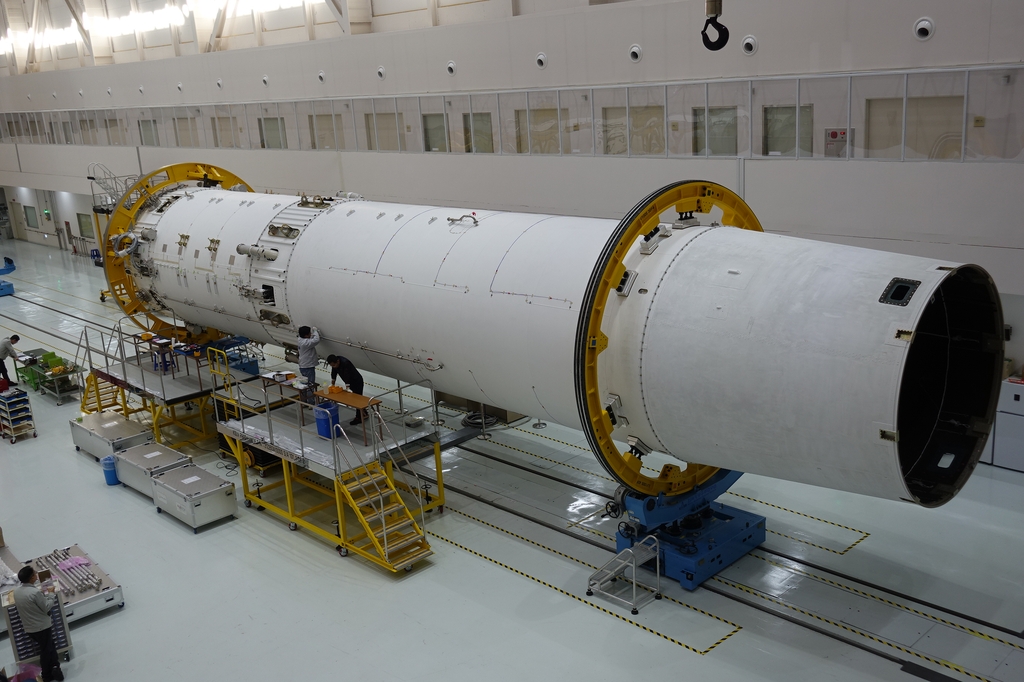 South Korea already tested the 75-ton thrust engine by launching one into space in November 2018. It also conducted extensive tests on the small 7-ton motor.

"Once the combustion test is carried out and everything checks out, a decision will be made to go ahead with the launching of the KSLV-2 that has been planned for February and November of 2021, although the exact date is subject to change," Cho said.

Of the two launches, the first will involve a dummy payload that will mimic the 1.5 ton max payload of the rocket, with the second to carry a small 200-kilogram test satellite into low orbit.

The KARI engineer said that following next year's launches, the goal is to secure funding to send the rocket into space four more times, in 2022, 2024, 2026 and 2027. This will allow Seoul to acquire the capability by 2030 to launch a 830-kilogram probe to the moon. The continued upgrading of the Nuri rocket will, in addition, make it possible for the country to build its own stage combustion cycle rocket (SCCR) engine that could compete with similar U.S. and Russian engines. KARI said work is already under way on the SCCR engine that is roughly 10 percent more efficient compared to motors used on the KSLV-2 and could lead to more economically viable space vehicle designs.

South Korea has set aside 1.95 trillion won (US$1.62 billion) for the KSLV-2 project that began in 2010 and runs through 2022. The previous KSLV-1 had a first-stage 170-ton thrust rocket motor built by Russia, with only the small 7-ton motor built here.