SEOUL, July 5 (Yonhap) -- The foreign ministry has fully activated a public-private task force set up to explore South Korea's security and economic strategies in the face of a growing rivalry between the United States and China, officials said Sunday.

The task force, comprising government officials, people from academia and corporate sectors, was established in December last year, but its operation has been limited due to the coronavirus pandemic, with members discussing issues via email without in-person meetings.

Now, the task force has been put into full-fledged operation with a face-to-face meeting Thursday, officials familiar with the matter said.

The meeting came as the tensions between Washington and Beijing have intensified after China passed the legislation on national security law designed to effectively tighten censorship and control on Hong Kong over any movements in objection to Beijing's policy.

South Korea has said it believes it is important that Hong Kong enjoys "a high degree of autonomy," under China's "one nation, two systems" policy, implying its concerns over the situation.

Separately, the government has also been holding an interagency strategy meeting on issues related to the Sino-U.S. competition. 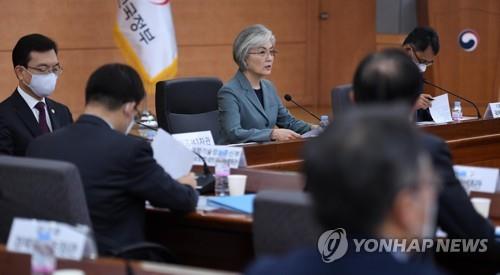