SEOUL, July 6 (Yonhap) -- South Korea will hold a ceremony to express thanks to countries that fought during the 1950-53 Korean War in commemoration of the 70th anniversary of the outbreak of the conflict, the veterans affairs ministry said Monday.

During the event on Tuesday, Prime Minister Chung Sye-kyun will deliver plaques of appreciation to ambassadors of 22 countries that fought alongside South Korea in the three-year war, according to the Ministry of Patriots and Veterans Affairs.

Around 1.95 million foreign warriors from the countries participated in the war, which broke out on June 25, 1950, to help South Korea fight the North backed by the Soviet Union and China. The two Koreas are still technically at war, as the conflict ended in a truce, not a peace treaty.

"We will continue to seek exchanges and cooperation with the U.N. member countries that took part in the war to keep the precious relations we built through the participation in the war seven decades ago," the ministry said in a release. 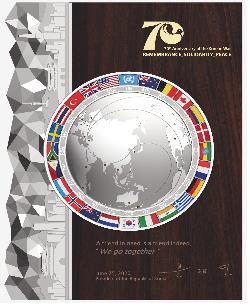