The government is under growing pressure to fundamentally review its real estate policy, as its 21 rounds of measures announced over the past three years to curb property speculation especially in Seoul and its adjacent areas have largely failed to attain their goals.

It released the latest set of measures on June 17 to further tighten lending rules and designate more areas in Seoul and its adjacent cities for tighter regulations. But apartment prices in the greater Seoul metropolitan area have been on the rise again, prompting opposition politicians and even progressive civic groups generally deemed friendly to the Moon Jae-in administration's key policies to challenge its real estate policy.

"Speeding up the enactment of follow-ups to the Dec. 16 and June 17 measures, (the DP) will increase the rates of the Gross Real Estate Tax for holders of multiple houses and corporate (house owners)," DP floor leader Kim Tae-nyeon said during a meeting of party executives.

"(The DP) will speedily push for the necessary enactment in order to stabilize housing prices," Kim noted.

The floor leader also said the ruling party will seek parliamentary measures to financially assist people wanting to buy their first home as well as to secure a stable supply of housing.

The move came four days after President Moon received an emergency report from Land Minister Kim Hyun-mee and instructed her to strengthen the tax burden for owners of two or more houses to "regulate speculative (housing) purchases."

Moon also urged authorities to increase the housing supply and ease the tax burden for those who want to buy their first house. 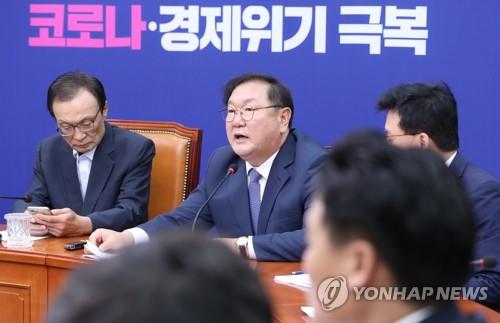