SEOUL, July 6 (Yonhap) -- After the troubled first month since the new assembly term began in late May, rival parties are poised to lock horns again over the ruling party-led initiative to launch a special investigative body targeting corruption by high-ranking public officials.

The establishment of the organization which has independent power to probe and prosecute high-ranking public officials, including top prosecutors, for corruption, was President Moon Jae-in's key campaign pledge. It is a core part of Moon's push for the reform of the state prosecution service, which has been accused of wielding excessive power and authority.

The president and the ruling party are seeking to appoint the head of the CIO by July 15 so that it can officially go into operation on the first day the related law takes effect.

The road to the office's final establishment is, however, likely to be paved with conflict with the main opposition United Future Party (UFP) claiming the launch is unconstitutional. 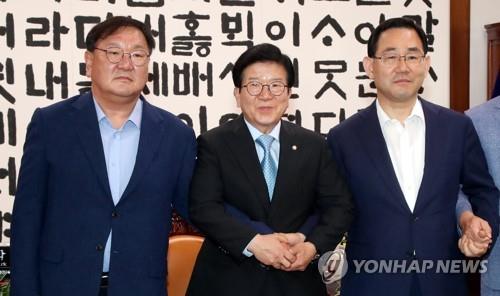 On Monday, UFP lawmakers officially ended their three-week boycott of the DP-led assembly in protest of the ruling party's "unilateral" formation of the parliamentary standing committees, and returned to the chamber vowing to continue their "fight" against the ruling party.

In protest against the envisioned investigative office, the UFP filed an appeal with the Constitutional Court in February, asking the court to determine whether the new organization's establishment is constitutional.

The UFP maintains that it cannot join the parliamentary process to launch the new body until the Constitutional Court's decision on the case.

The opposition by the UFP, which holds veto power over the DP's pick of candidate to lead the CIO, is likely to become a major stumbling block to the DP-led efforts to launch the office at the earliest possible date.

Under the law governing the establishment and running of the CIO, a seven-member committee composed of the justice minister, the head of the National Court Administration, the head of the Korean Bar Association and four lawmakers -- two from the DP and two from the UFP -- are required to jointly recommend two candidates to lead the new office. The president is entitled to finally pick one of the two candidates.

Any candidate must win approval from at least six out of the seven committee members before being finally presented to the president, a crucial qualification which could make the appointment process a difficult, time-consuming ordeal.

The DP, controlling a majority of the 300 parliamentary seats, is determined to do all it can, including even revise the law, to make the new organization happen.

"If the UFP refuses to recommend its lawmakers to the recommendation committee until the end, indefinitely delaying the launch of the investigative body, it could eventually become a reason for a law revision," Rep. Yun Ho-jung of the DP who chairs the parliamentary legislation committee said in a radio interview last Thursday.

The main opposition's contentious push for a number of politically-charged initiatives is likely to further spark partisan rows at the National Assembly this month, including a plan to impeach Justice Minister Choo Mi-ae for abuse of power over the minister's ongoing spat with Prosecutor General Yoon Seok-youl.

The opposition party is also demanding the launch of an official parliamentary investigation into Rep. Yoon Mee-hyang of the DP, an ex-activist for former victims of Japan's World War II sexual enslavement, who is suspected of misusing funds meant for aging victims.

The impending parliamentary confirmation process for National Intelligence Service chief nominee Park Jie-won and unification minister nominee Lee In-young is likely to become another flash point between the rival parties after the UFP denounced Lee as too "placable" on North Korea.

"(The UFP) will laser focus on thoroughly verifying (the qualifications) of the nominees to rule out anyone who is unqualified," UFP floor leader, Rep. Joo Ho-young said during a press conference a day earlier. 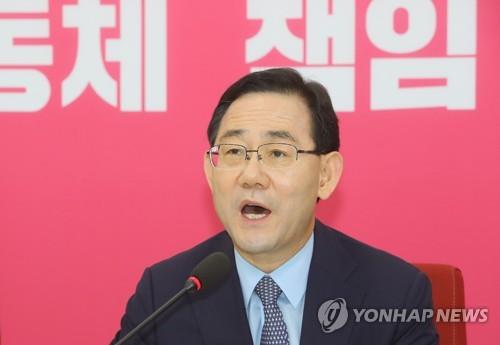