SEOUL, July 7 (Yonhap) -- Russia's top envoy in Seoul has called for economic cooperation with North Korea, casting it as a "powerful driver for peace and mutual trust," amid Pyongyang's deepening hardships due to biting sanctions and the coronavirus pandemic.

Ambassador Andrey B. Kulik made the remarks in an interview with Yonhap News Agency, referring to stalled Inter-Korean projects and trilateral undertakings involving Russia, such as a logistics scheme using a railway linking the North's port city of Rajin and Russia's border town of Khasan.

"When you have joint relations, like the Kaesong industrial complex and Mount Kumgang tourist complex, gas pipe line and electric line, you start thinking not about tensions, about conflicts, but start thinking very constructively," the ambassador said.

"Economy is a very powerful driver for peace and mutual trust," he added. 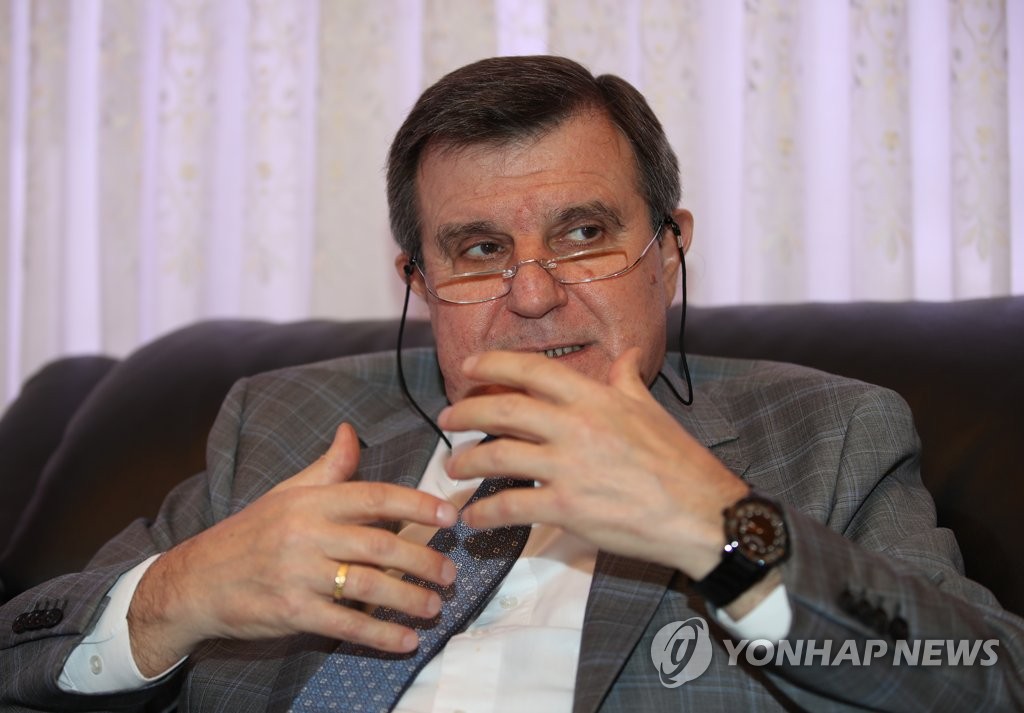 His comments came in the wake of a rise in tensions caused by the North's suspension of cross-border communication, surprise demolition of an inter-Korean liaison office in its border city of Kaesong and hostile rhetoric.

The communist regime's provocative moves came amid its deepening economic woes triggered by crippling sanctions and COVID-19-driven curbs on trade with China, its key economic partner, tourism and other business activity.

The ambassador voiced hope for the resumption of the Rajin-Khasan project and inter-Korean economic exchanges, stressing they are "absolutely peaceful" and will play a "very important political role" for stability on the peninsula.

"As political circumstances and conditions will make it possible, I think these projects can be implemented," Kulik said.

Touching on lingering skepticism over engagement with the North, the diplomat voiced confidence that if all sides move "in the right direction," the situation will change for the better, as witnessed in 2018 when the mood for peace increased with a flurry of summits between the two Koreas and between the U.S. and the North.

"There's [an] old proverb, saying you can't clap with only one hand. You cannot have an orchestra with only one musician. It should be a joint effort, not only ours," he said.

Russia, along with China, has often been cited as a country with influence over the North -- a reason why the international community called for its role to catalyze peace efforts on the peninsula. But Kulik challenged that claim, stressing Pyongyang is a "highly independent" country.

"We should be very careful with such conclusions. It's an independent entity which makes decisions, especially important questions, on its own," he said.

Asked about Russia's assessment of the COVID-19-related situation in the North, Kulik said that Pyongyang seems to have "somehow" managed to avoid the pandemic. The North has not yet officially reported any virus case, though it stressed nationwide efforts to contain the pandemic.

"I have no facts which could make me believe that there's a pandemic in North Korea. No. No facts," he said. "Our people in Pyongyang never said about the pandemic also. Somehow they have managed it."

Regarding the speculation that Moscow might have allowed some North Korean workers -- banned under a U.N. Security Council sanctions resolution -- to stay in Russia with student or tourist visas, Kulik stressed that his country has "sincerely and consistently" fulfilled all of its obligations.