SEOUL, July 7 (Yonhap) -- North Korea reiterated Tuesday it has no intention to hold talks with the United States, just hours before Washington's top nuclear envoy is set to arrive in Seoul to discuss how to break the impasse in nuclear negotiations with Pyongyang.

Kwon Jong-gun, the North Korean foreign ministry's director-general handling U.S. affairs, made the remark in a statement, saying there are still people talking about brokering a meeting between the U.S. and the North even after First Vice Foreign Minister Choe Son-hui made clear that the North won't hold talks with the U.S.

"Explicitly speaking once again, we have no intention to sit face to face with U.S.," Kwon said in a statement carried by the North's official Korean Central News Agency.

On Saturday, Choe made a similar statement that the communist nation feels no need to sit down with the U.S. while accusing Washington of taking advantage of dialogue between the two countries as "a tool for grappling its political crisis."

Kwon's statement came as U.S. Deputy Secretary of State Stephen Biegun, who doubles as Washington's point man on the North, was set to visit Seoul later in the day amid speculation that he could seek to kick-start stalled nuclear negotiations with North Korea. 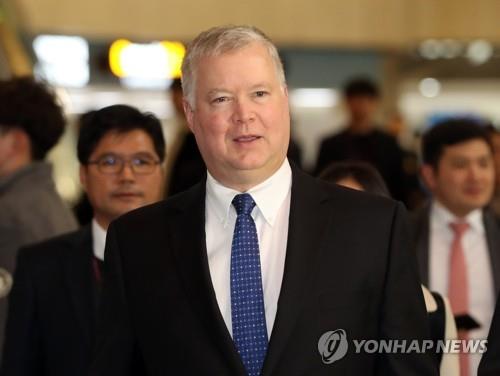 Talk of another summit between U.S. President Donald Trump and North Korean leader Kim Jong-un has gained traction since South Korean President Moon Jae-in recently said he would push for such a meeting to happen before November's U.S. presidential election.

"Our first vice-foreign minister recently made clear her stand in a statement over untimely 'rumor about a DPRK-U.S. summit.' The statement also mentioned the meddlesome man who had again indicated his intention to arbitrate between the DPRK and the U.S. regardless of time," Kwon said.

"Nevertheless, such nonsensical talks that there was no change in their efforts to mediate a DPRK-U.S. summit are ceaselessly heard from the south. They seem to have a bad ear or are guided by the habit of always talking in their own favor," he said.

Kwon said the South's efforts to become "the mediator" will prove futile.

"Time will show whether its efforts will succeed or it will only suffer a loss and ridicule," he said.

Trump and Kim have met three times since June 2018 to reach a deal on dismantling North Korea's nuclear weapons program, but little progress has been made due to the gap over the scope of Pyongyang's denuclearization and sanctions relief by Washington.

Last week, Biegun said at a forum in Washington that chances of another summit between the two leaders before the election would be low but reaffirmed the U.S. remains willing to engage with the North.

Former U.S. National Security Adviser John Bolton also earlier said Trump could meet with Kim if he believes a summit would help his reelection chances. Such a meeting could happen as an "October surprise" just before the election, he said.

(LEAD) N.K. again rejects possibility of talks with U.S. as Biegun set to arrive in Seoul

(LEAD) N.K. again rejects possibility of talks with U.S. as Biegun set to arrive in Seoul