SEOUL, July 7 (Yonhap) -- Former prime minister Rep. Lee Nak-yon announced Tuesday his bid to run in the ruling Democratic Party's (DP) leadership election in August, officially kicking off what many regard as his political journey to the presidency.

Lee has been leading public polls on the most favored presidential candidates for nearly a year, including those released in June by Gallup Korea and Real Meter.

His candidacy for the DP chairmanship comes 20 months ahead of the next presidential election set for March 2022.

"I made a resolution that I must do all I can to carry out the historic duty of overcoming the national crisis, which is upon the DP and me," the lawmaker said in a press conference at the National Assembly.

"I resolved so that I will be able to answer if (somebody) asks me in the future, 'Where have you been when the nation was in a crisis?'" Lee noted.

The lawmaker pledged that he will address top priority tasks that South Korea is facing, such as the new coronavirus outbreak, economic slowdown and national security issues, by enacting necessary laws and supporting state policies on building peace on the Korean Peninsula.

"The road to overcoming the national crisis must sometimes be paved with thorns or (stumbling) blocks ... But I will not refuse to tackle any difficulties," Lee said.

Lee won the politically symbolic constituency of Jongno in central Seoul in a matchup against Hwang Kyo-ahn, then the chairman of the rival United Future Party, cementing his political influence. 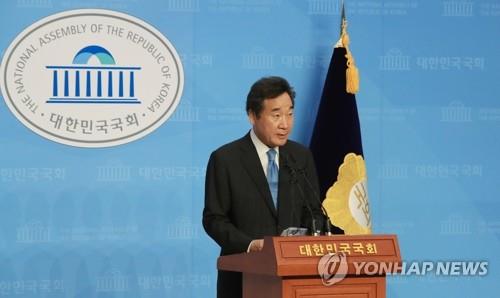 Running for the DP chairmanship, Lee has a few nagging problems to address.

Securing a solid support base inside the DP is one of the pressing needs for Lee, who reportedly has yet to prove himself to the party's mainstream pro-Moon school.

Lee also needs to convince party members of the legitimacy of his party chairmanship candidacy since he would have to resign seven months after taking the seat in order to run in the next presidential election, in accordance with party regulations.

He will also have to beat Kim Boo-kyum, a former four-term lawmaker and a party heavyweight who is running for the party leadership, to finally take the helm of the super majority ruling party, which controls 176 of the 300 parliamentary seats.

The party leadership election, set for Aug. 29, has been narrowed down to a match between Lee and Kim after two prospective candidates -- Rep. Hong Young-pyo and Rep. Woo Won-shik -- dropped out of the race last week amid accelerating competition.

Kim is planning to officially announce his bid for the party chairmanship on Thursday.

With the two high-profile politicians' running, the significance of the upcoming party leadership election has grown to serve as the party's de facto miniature pre-election for the presidential race. 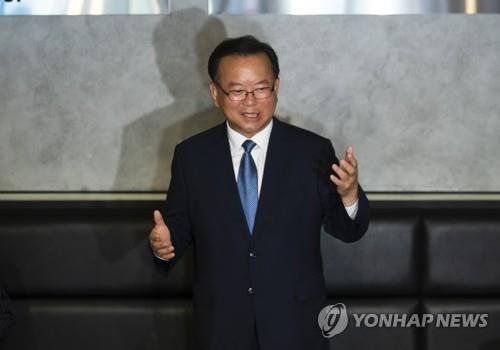