SEOUL, July 7 (Yonhap) -- This is starting to sound like a broken record: the Doosan Bears have defeated the LG Twins in their all-Seoul meeting in the Korea Baseball Organization (KBO).

The Bears pounded out 14 hits in a 9-6 victory at Jamsil Baseball Stadium in the nation's capital Tuesday and enjoyed their sixth consecutive win over their Jamsil co-tenants.

The Twins beat the Bears 8-2 on Opening Day on May 5, and the Bears have won every meeting since. They improved to 32-22 and stayed in third place, while the Twins fell to 29-25.

Four Bears had multihit games, led by four-hit effort from No. 2 hitter Jose Miguel Fernandez. After a five-hit explosion on July 1, Fernandez had gone 0-for-14 in the next four games. Then on Tuesday, he was 4-for-4 with an RBI and three runs scored while coming up a triple shy of a cycle. 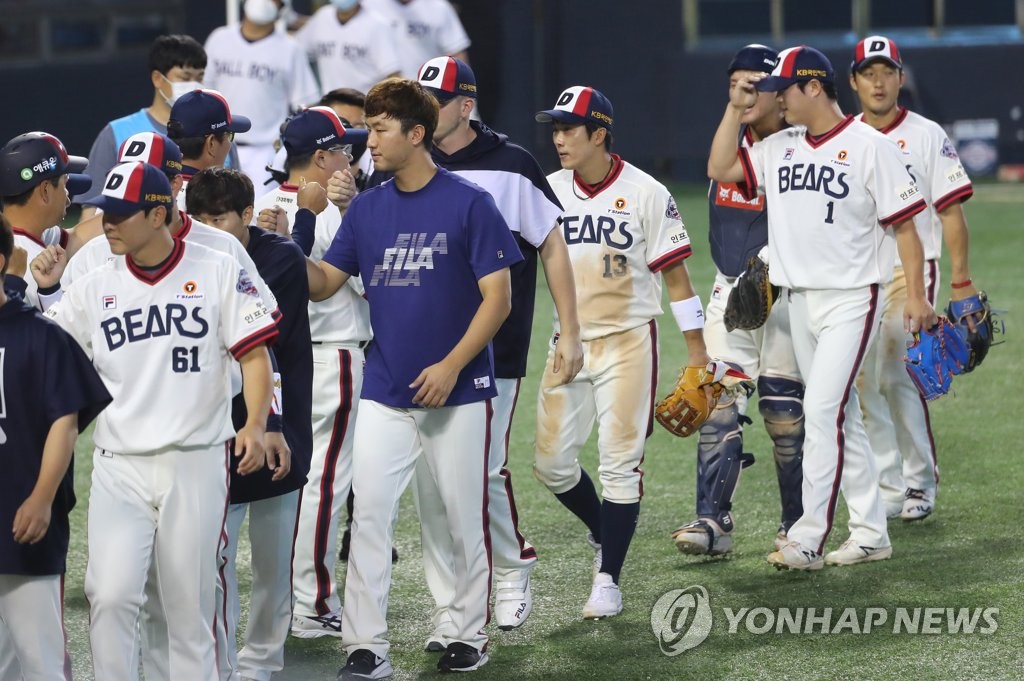 The Bears didn't mess around, as their first two batters of the game each hit a single and both came home for a 2-0 lead in the bottom first.

With runners at the corners, Kim Jae-hwan drove in the first run with an infield single off the leg of LG starter Cha Woo-chan. After fielding the ball that had caromed off his leg, Cha made a wild throw to first, allowing runners to each advance a bag.

Oh Jae-il chopped a grounder to second base to bring Fernandez home from third.

Kim Hyun-soo cut the deficit in half for the Twins with a two-out double in the top third, and then the Twins took a 3-2 lead in the fourth with back-to-back solo blasts by Roberto Ramos and Kim Ho-eun.

But the Twins lost that lead in the bottom fourth and never went ahead again.

The Bears tied it up at 3-3 in the bottom fourth with Park Sei-hyok's sacrifice fly. Then they went off for four runs on five hits and a sac fly in the bottom fifth to blow the game wide open.

Heo and Fernandez had a single and a double against Cha to open the salvo, and Park Kun-woo brought in the go-ahead run with a sacrifice fly.

A follow-up single by Kim Jae-hwan made it 5-3 for the Bears. Cha got the second out and then gave up a double and a walk to load the bases for Park Sei-hyok.

At full count, Park knocked a single to right to cash in two more runs, giving the Bears a 7-3 lead and chasing Cha from the game.

Fernandez extended the lead to 8-3 with a solo home run in the sixth.

The Twins tried to make things more interesting in the seventh, with Hong Chang-ki's pinch-hit triple and Lee Chun-woong's RBI groundout making it an 8-5 game.

The Bears got a run back on a fielder's choice grounder by Park Kun-woo. The Twins eked out a run in the top ninth, but they couldn't get any closer.

Heo and Fernandez, from the top of the Bears' order, combined to go 7-for-8 with six runs scored.