Biegun began his three-day trip here Tuesday, apparently to renew the U.S.' commitment to diplomacy with the communist state and forestall escalation of tensions caused by its recent demolition of an inter-Korean liaison office, warnings of now-suspended military plans and hostile rhetoric.

The U.S. diplomat, who doubles as Washington's top nuclear envoy, is scheduled to meet with his South Korean counterpart, Lee Do-hoon, with their agenda likely to focus on how to create the momentum for dialogue with Pyongyang.

The nuclear talks between the U.S. and the North have not been held since their last working-level session in Sweden in October, as the two sides remained at odds over the extent of Pyongyang's denuclearization and Washington's sanctions relief.

After the talks with Lee, Biegun is expected to reiterate the U.S.' readiness to reengage with the North in a public message. But skepticism lingers over whether Pyongyang will warm to dialogue, as it suspects Washington eyes talks with a political intent ahead of the U.S. election in November.

Pyongyang's First Vice Foreign Minister Choe Son-hui said Saturday that the North does not feel any need to sit face to face with the U.S., accusing Washington of using nuclear talks as "nothing more than a tool for grappling its political crisis." 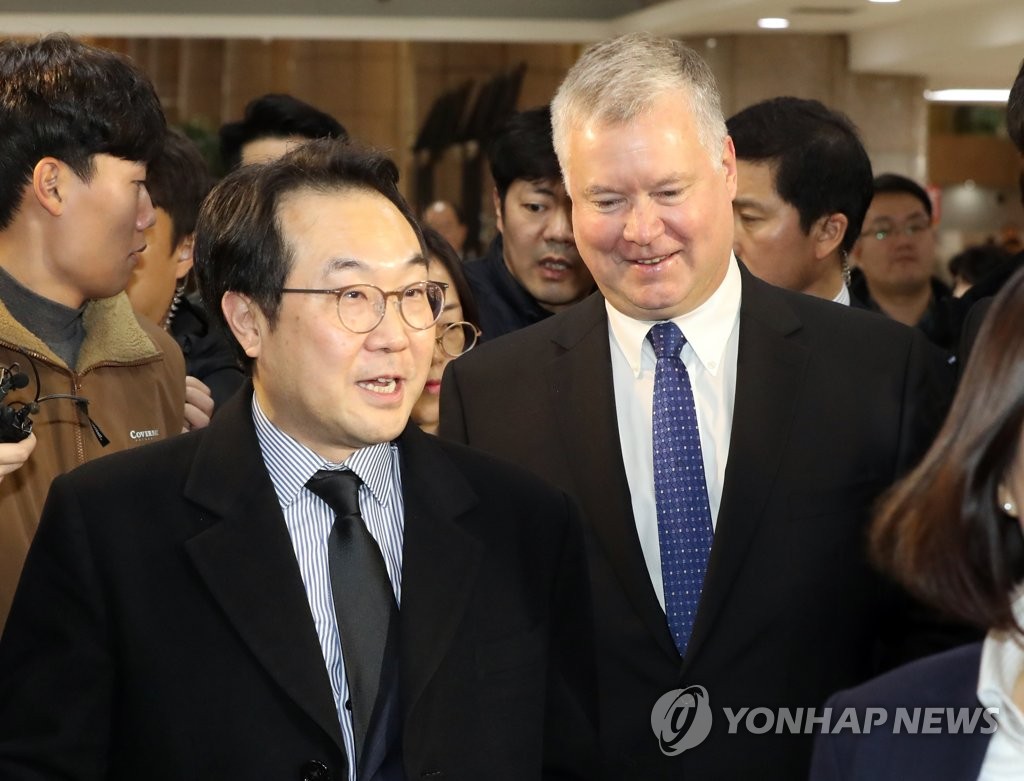 At their separate talks, Biegun and Cho are expected to discuss an array of bilateral and broader issues, including the impasse in the allies' defense cost-sharing talks, the U.S.' move to expand the Group of Seven advanced countries and its push to shift global supply chains away from China.

Alex Wong, the U.S. deputy special representative for North Korea, is accompanying Biegun. But White House National Security Council Senior Director for Asian Affairs Allison Hooker was not in Biegun's entourage, spawning rumors of the U.S.' diminishing appetite for talks with the North.

Biegun's trip came amid growing concerns that a recent rise in cross-border tensions could threaten to derail the yearslong endeavor to denuclearize the North and lay the groundwork for lasting peace on the peninsula.

Last month, tensions rose sharply as the North cut off cross-border communication, blew up the joint liaison office in its border city of Kaesong and threatened to take military steps against the South, such as redeploying troops to border areas.

The North took the provocative steps ostensibly in anger over anti-Pyongyang leaflets sent from the South, but observers say they appeared aimed at diverting public attention from its deepening hardships caused by biting sanctions and the new coronavirus.

Biegun plans to fly to Japan on Thursday before returning home.