SEOUL, July 8 (Yonhap) -- The value of Japan's exports to South Korea sank to a near 11-year low in May due to the coronavirus pandemic and Tokyo's export controls, data showed Wednesday.

Japan shipped 329.3 billion yen (US$3 billion) worth of goods to its neighboring country in May, down 18 percent from a year earlier, according to the data from the Korea International Trade Association (KITA) and the Japan Tariff Association.

The value of Japan's exports to Seoul rose to 415 billion yen in February from 371.6 billion yen in January before remaining in the 400 billion-yen level in March and April.

Japan's food exports plunged 41.6 percent on-year in May, with shipments of raw materials and minerals also sinking about 49 percent and 70 percent, respectively. 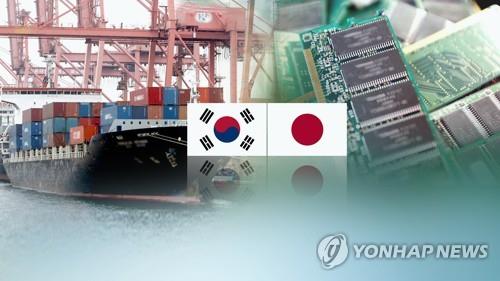 "The May drop resulted from slacking South Korean demand for Japanese goods due to the coronavirus pandemic, Japan's export controls on key industrial parts and a subsequent boycott of Japanese goods here," a KITA researcher said.

Angered by Japan's move, South Korean consumers kicked off a boycott campaign against Japanese products, which dealt a harsh blow to cars and beer brands.

In May, Japan's exports to South Korea accounted for 7.9 percent of its overall overseas shipments, unchanged from the previous month.

The ratio sank as low as 5.8 percent in October following the export restrictions before recovering to 6.8 percent in January and 7 percent in March.

The data also showed the value of Japan's imports from South Korea tanked 27.3 percent on-year to 200.9 billion yen in May, the lowest level since April 2010.
(END)