Jeong and Abrams held the meeting at the ministry's main building in Seoul on Tuesday "to discuss diverse pending issues," a source said.

Detailed agenda items were not known, but the meeting took place at a time when South Korea and the U.S. have been discussing when and how to stage their annual summertime exercise, which is usually held in around August.

This year's key springtime drills were called off over COVID-19 concerns.

The ongoing pandemic could prevent U.S. troops from coming to South Korea, which will affect the upcoming exercise, according to the sources. Recently, USFK has reported COVID-19 patients among its newly assigned service members.

"The two sides have yet to reach a decision on the summertime exercise. We are closely monitoring related factors, such as COVID-19," a ministry official said.

Last week, Abrams stressed that their semi-annual theatre-level combined exercises, as well as live fire trainings based on rigorous scenarios, should take place to maintain a staunch readiness posture in the face of evolving threats by North Korea.

Sources have said the two sides differ over how to program the envisioned exercise.

Seoul has stressed that it should focus on the assessment of its capabilities to retake wartime operational control (OPCON) of its troops from Washington, as they agreed earlier. But the U.S. military maintains it should be meant to boost their joint posture as a replacement of the springtime training, rather than preparations for the OPCON transfer.

This year's summertime exercise drew particular attention given the security situation on the Korean Peninsula. 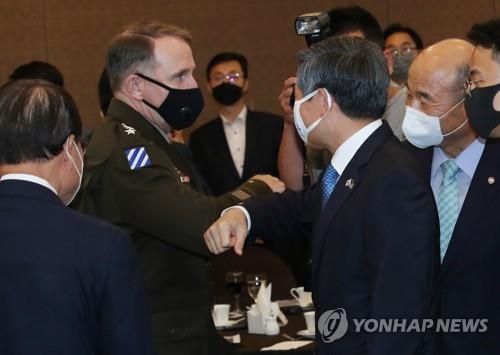