SEOUL, July 8 (Yonhap) -- U.S. Deputy Secretary of State Stephen Biegun on Wednesday reaffirmed the United states' "ironclad" commitment to the defense of South Korea and pledged to be "fully engaged" with efforts to promote peace on the Korean Peninsula.

Biegun made the remarks in the wake of a rise in tensions caused by North Korea's recent demolition of an inter-Korean liaison office, bellicose threats and rhetoric, as well as speculation that the U.S. may try to cut troop levels in South Korea over defense cost negotiations.

"We discussed the very foundation of the U.S.-Republic of Korea alliance. I want to assure all who have any questions about this: U.S. commitment is ironclad for the defense of the Korean Peninsula," Biegun told reporters after talks with First Vice Foreign Minister Cho Sei-young.

"We continue that strong commitment. Our United States military, (and) our United States government are fully in partnership of the alliance of Korea and it's a great pleasure to reaffirm today in my meetings with Vice Minster Cho," he added.

Biegun's remarks came amid lingering concerns that differences in protracted defense cost-sharing talks between Seoul and Washington could undercut their alliance or lead to a U.S. troop drawdown like the recent U.S. decision to cut troops in Germany.

The deputy secretary also stressed Washington's commitment to peace efforts with Pyongyang that have been stalled amid the impasse in nuclear negotiations between the two countries.

"We discussed peace on the Korean Peninsula, an effort that we continue to be fully engaged with and cooperate very closely with the Republic of Korea and look forward to making progress on as we continue through into this year," he said. 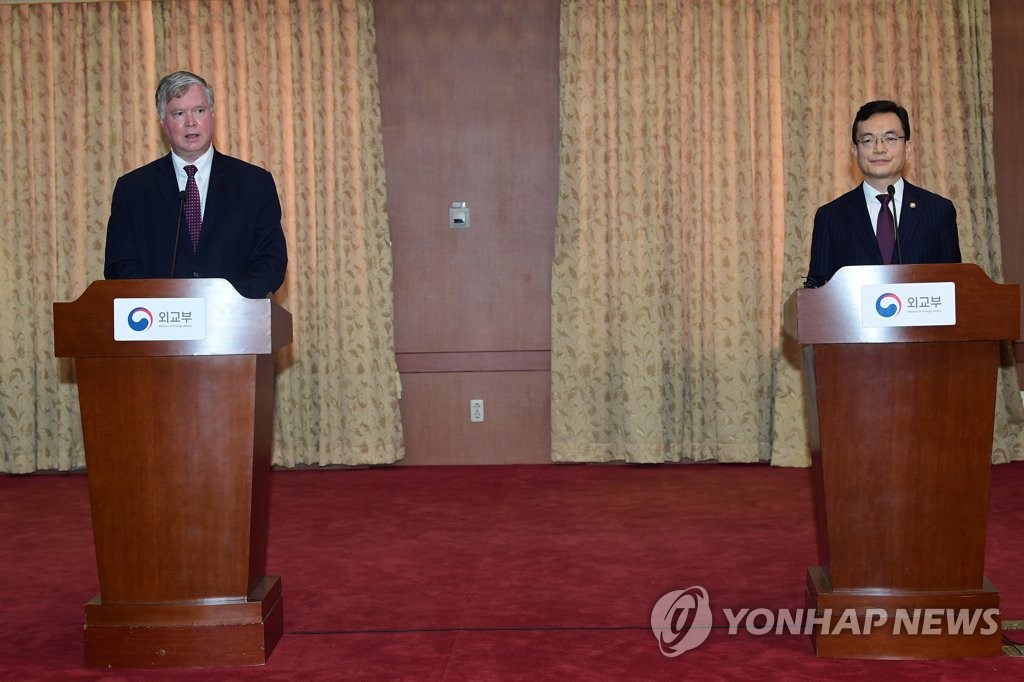 At the talks between Cho and Biegun, the two sides reaffirmed their desire to reach a deal at an early date over how to share the cost for stationing the 28,500-strong U.S. Forces Korea.

"Regarding the defense cost-sharing talks, the two sides shared the understanding of the need to make continued efforts to reach a mutually acceptable result at the earliest possible date," Cho said at the press meeting.

Cho also said the two sides agreed to continue to explore "harmonious cooperation" between Seoul's New Southern Policy and Washington's Indo-Pacific Strategy based on principles of "openness, transparency and inclusiveness."