SEOUL, July 8 (Yonhap) -- The bulk of South Korean small and medium enterprises (SMEs) expect the U.S.-China trade war to escalate due to the coronavirus pandemic, a poll showed Wednesday.

According to the survey of 300 small exporting companies by the Korea Federation of SMEs, 86.3 percent of respondents predicted an escalation of the Sino-American trade row down the road.

The U.S. and China, the world's two largest economies, have engaged in a tit-for-tat tariff war since mid-2018, with Washington upping the ante following the coronavirus outbreak.

Forty-five percent of the surveyed firms said an expanded trade dispute would last six months to one year, with nearly 32 percent anticipating a period of one to three years. 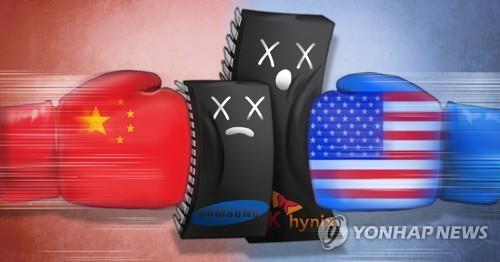 Another 15.7 percent projected the escalated trade spat to continue for six months or less.

About 51 percent said the Sino-U.S. trade conflict would negatively affect them, with 47 percent expecting no repercussions.

Possible negative effects include weakening exports stemming from a global economic slowdown and higher volatility due to a U.S.-China currency war and a fall in exports to China.

Asked about their possible responses, 42 percent said they have no proper countermeasures, while some 33 percent cited the need for greater efforts to diversify export markets.

The federation said an escalated trade war between the U.S. and China, South Korea's two largest trading partners, could deal a further blow to local SMEs already pounded by the coronavirus outbreak.

China is South Korea's top export market, accounting for about a quarter of Seoul's overseas shipments, and the U.S. is the No. 2 destination.

The South Korean economy, Asia's fourth-largest, has been stung by the coronavirus outbreak, which has sent its exports tumbling and dampened domestic demand due to strict social distancing.
(END)