SEOUL, July 8 (Yonhap) -- A single-person household is the most common type of living arrangement in South Korea, data showed Wednesday.

Data released by the Ministry of the Interior and Safety showed 8.77 million single-person residence registrations, accounting for 39 percent of the total number of 22.7 million.

The second most common type was two-person households at 5.26 million, or 23.1 percent.

The data also showed that more men live alone than women, by 51.5 per cent to 48.5 percent, but the trend reversed in people age at 60 or over. Most single-person households comprised of persons older than 70 were headed by women.

In the southeast ward of Gwanak and the western ward of Mapo in Seoul, a majority of single households are comprised of people aged at 30 or younger.

The country's population came to 51.8 million, of which 26 million, or 50.2 percent, live in the capital area, which includes Seoul, Incheon and Gyeonggi Province.

However, the capital area has fewer households than the rest of the country, with 11.20 million versus 11.58 million.

The country's population decreased by 10,453 from a year ago, while the number of households rose by 31,065 during the same period due to the rise in single-person households. A household had, on average, 2.27 people. 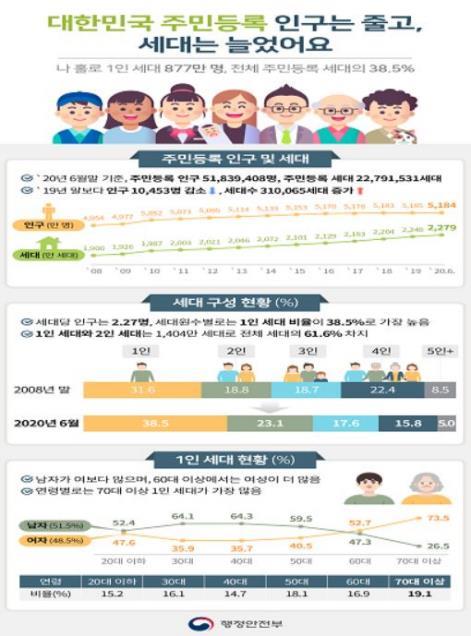