GIMPO, South Korea, July 9 (Yonhap) -- A man has been arrested under laws mandating heavier punishment for car accidents within school zones, police said Thursday, the first arrest under the laws that were introduced four months ago.

The Gimpo Police Station said it detained the man, in his 30s, for hitting and injuring a 7-year-old child who was crossing the street in a school zone in Gimpo, just northwest of Seoul, on April 6, for violating the revised laws on road safety and aggravated punishment of specific crimes.

This was the first arrest made since the so-called Min-sik's laws came into force in March. The laws were named after a 9-year-old boy who died in a car accident in a school zone in Asan, South Chungcheong Province in September.

According to the police, at the time of the accident in April, the child was entering the crosswalk again after the light turned red to pick up something that a younger sibling had dropped.

The man, whose identity was not made public, was driving faster than 40km/h in the school zone, where the speed limit is 30km/h, and his driving license had been suspended for drunk driving.

The kid sustained a minor injury, the police said.

The Min-sik's laws are designed to protect children in school zones. Under the law, the speed limit is set at a 30km/h or slower and various safety tools, such as speed cameras and speed bumps, should be installed in school zones.

The laws require tougher punishment of up to life imprisonment when an accident leads to a death. In case of injuries, a driver can be imprisoned for up to 15 years and fined a maximum of 30 million won (US$25,000).

Lee Yong-ju, an official from the police station, said it took longer than expected to arrest the man because the police received the report 20 days after the accident occurred and it took time to retrieve and analyze black box footage.

"We will take violations of Min-sik's laws seriously and thoroughly investigate them," he said. 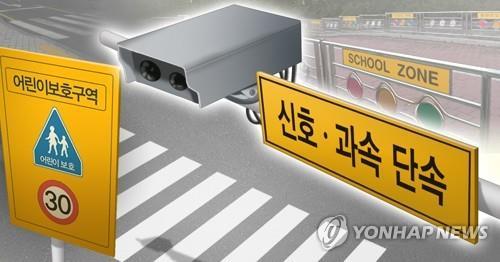