The two met at the presidential office Cheong Wa Dae in the morning on the last day of Biegun's three-day visit to South Korea, aimed at reviving stalled diplomacy with Pyongyang.

Thursday's meeting is believed to have been focused on ways to alleviate tension on the Korean Peninsula and to break out of the stalemate in diplomacy with North Korea, the sources said.

Demolishing the inter-Korean liaison office in its border town of Kaesong last month and issuing a barrage of verbal threats, North Korea dialed up tension on the peninsula as its negotiation with the U.S. is at a standstill.

The U.S. and South Korean officials are also believed to have conferred on ways to move forward inter-Korean relations after Biegun said a day earlier that he "strongly" supports cooperation between the two Koreas.

"The United States strongly supports inter-Korean cooperation, and we believe this plays an important component in creating a more stable environment on the Korean Peninsula," Biegun said after his meeting with Lee Do-hoon, the top South Korean envoy on North Korea's nuclear issue, Wednesday.

The U.S. official, who doubles as the chief nuclear envoy, also expressed the U.S.'s willingness to resume dialogue with North Korea.

Biegun did not make a courtesy visit to President Moon Jae-in.

Biegun is scheduled to depart for Japan in the afternoon. 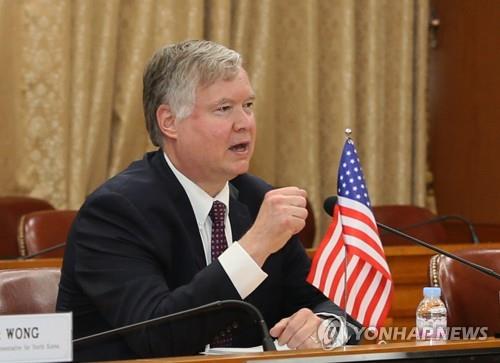