The two met for 70 minutes at the presidential office Cheong Wa Dae in the morning, on the last day of Biegun's three-day visit to South Korea, aimed at reviving stalled diplomacy with Pyongyang.

Cheong Wa Dae said Suh, during the meeting, "highly appreciated" Biegun's dedication to reviving the U.S.' dialogue with North Korea and urged him to continue such efforts.

In response, the U.S. official stressed the importance of resuming U.S.-North Korea dialogue, pledging his country's intimate cooperation with Seoul, according to the presidential office.

The U.S. official, who doubles as the chief nuclear envoy, expressed the U.S.' willingness to resume dialogue with North Korea during his meeting with the top South Korean envoy on North Korea's nuclear issue a day earlier.

"Representative Biegun reaffirmed that the U.S. has a flexible position with an eye to reaching a balanced agreement when dialogue with the North resumes, and pledged to continue related efforts," the South Korean envoy, Lee Do-hoon, said after the meeting.

Also discussed during the Suh-Biegun meeting were alliance issues.

The two reaffirmed their countries' commitment to the South Korea-U.S. alliance while agreeing that the two allies need to promptly complete their negotiations on the cost sharing for the upkeep of American forces in South Korea, Cheong Wa Dae said.

Thursday's meeting came amid a need to alleviate tensions on the Korean Peninsula and break out of the stalemate in diplomacy with North Korea.

Demolishing the inter-Korean liaison office in its border town of Kaesong last month and issuing a barrage of verbal threats, North Korea dialed up tensions as its negotiations with the U.S. are at a standstill.

Biegun reportedly did not make a courtesy visit to President Moon Jae-in.

Biegun was scheduled to depart for Japan in the afternoon. 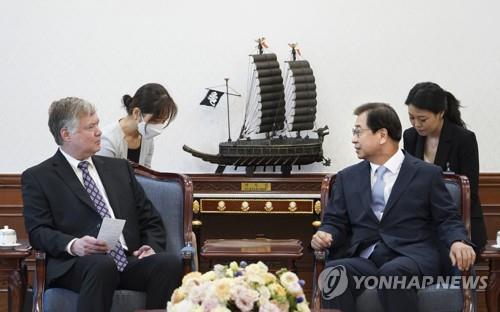