Two days earlier, Lee, a five-term lawmaker, made pubic his decision to run in the Democratic Party election set for Aug. 29, which is going to be a match between the two party heavyweights.

Having led public polls on the most favored presidential candidates for nearly a year, Lee is widely expected to win the chairman seat, but Kim is trying to boost his odds of winning by offering to serve the full two-year term if he wins.

Lee, however, is highly likely to resign seven months after taking the seat, if he wins, in order to run in the next presidential election in March 2022.

"I will become a party leader who is accountable ... who toils to row (the boat), not one who enjoys a flower palanquin ride," Kim said, announcing his bid during a press conference.

Kim said he will not run in the next presidential election if he wins the party chairman seat, so that he can fully serve the two-year term.

"I firmly promise that I will complete the two-year party chairman term ... in order to have (the DP's) presidential candidate certainly win the (presidential) election," Kim noted.

Kim lost his constituency in Daegu in the previous general elections on April 15. But the liberal lawmaker's winning of the constituency in the staunchly conservative city four years earlier made him a political icon in South Korea's highly regionalism-based political scene.

He pledged to adopt a basic income plan, support the ongoing prosecution reform initiative and resolve wealth inequality attributable to soaring house prices if he takes office as the party leader.

After two prospective DP lawmakers dropped their candidacies last week, the party leadership election will be a race between Kim and Lee, with the winner taking the helm of the super majority ruling party, which controls 176 of the 300 parliamentary seats. 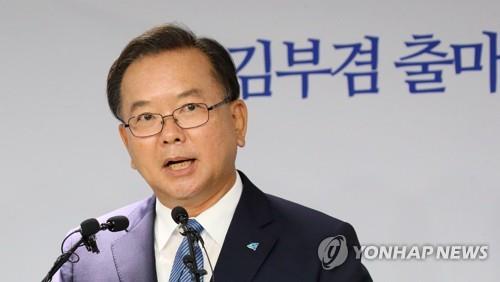