SEOUL, July 10 (Yonhap) -- Another summit with the United States is "not needed" and "not beneficial" for North Korea as long as there is no change in Washington's negotiating position, the sister of leader Kim Jong-un said Friday.

Kim Yo-jong made the remark in a statement carried by the official Korean Central News Agency after U.S. President Donald Trump said earlier this week that he would hold another summit with the North's leader "if I thought it was going to be helpful."

"I doubt that things like the DPRK-U.S. summit talks would happen this year," Kim Yo-jong said, though she added that "a surprise thing may still happen, depending upon the judgement and decision between the two top leaders."

"Serious contradiction and unsolvable discord exist between the DPRK and the U.S. Under such circumstances, I am of the view that the DPRK-U.S. summit talks are not needed this year and beyond, and for our part, it is not beneficial to us unless the U.S. shows decisive change in its stand," she said.

But such changes do not mean the lifting of sanctions, she said.

"We completely ruled out the issue of lifting sanctions from the agenda of negotiations with the U.S.," Kim said. "I believe that the previous theme of the DPRK-U.S. negotiations, that is, 'denuclearization measures versus lifting of sanctions' should be changed into a formula of 'withdrawal of hostility versus resumption of DPRK-U.S. negotiations.'"

"We are fully capable of living under any sanctions," she said.

Kim said the North won't go back to its previous proposal to give up its Yongbyon nuclear complex in exchange for sanctions relief from the U.S. The North made the proposal during last year's summit in Hanoi, but the meeting broke down without a deal as the U.S. demanded the North give up more nuclear facilities.

Nuclear talks between the U.S. and the North have stalled since the no-deal summit.

Kim warned that it "totally depends on how the U.S. behaves itself whether or not it will bump into such a troublesome problem."

"The U.S. may still worry about receiving a Christmas gift on the eve of the presidential elections, which it hasn't received so far," she added, referring to last year's threat to undertake provocative acts as a Christmas gift to the U.S.

She also said that the personal feelings that leader Kim has toward Trump are "undoubtedly good and solid," but the North "should not adjust its tactics on the U.S. and our nuclear program" depending upon the relations with the U.S. president.

Leader Kim also asked her to extend greetings wishing Trump success in his work, she said.

On Tuesday, Trump said he's open to a meeting with Kim.

"I understand they want to meet and we would certainly do that," Trump said in an interview with Gray Television's Greta Van Susteren, according to Voice of America and other news reports. "I would do it if I thought it was going to be helpful.

Asked if he thinks such a meeting would be helpful, Trump said, "Probably. I have a very good relationship with him, (so it) probably would be." 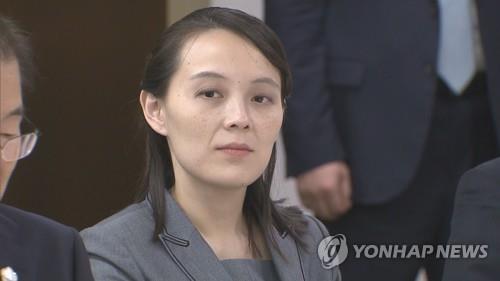 (4th LD) Another summit with U.S. 'not needed,' 'not beneficial': Kim's sister

(4th LD) Another summit with U.S. 'not needed,' 'not beneficial': Kim's sister