SEOUL, July 10 (Yonhap) -- An association of South Korean firms involved in a long-suspended tour program to North Korea's Mount Kumgang urged the government on Friday to push for legislation that would mandate financial compensation for losses from the suspension.

The association, comprised of 49 companies who invested in the tour program, made the demand as they marked the 12th anniversary of the suspension of the tour program to the mountain on the North's east coast.

"The government should apologize to businesspeople and swiftly push for relevant legislation to compensate for the losses," the association said. "It also has to clarify what led to the suspension of cross-border economic cooperation and come up with support measures in a preemptive manner."

"It has continued to ask us to wait, on the assumption that the tour program should be resumed," it added. "Now the only answer is to seek compensation for the lost 12 years and resultant suffering." 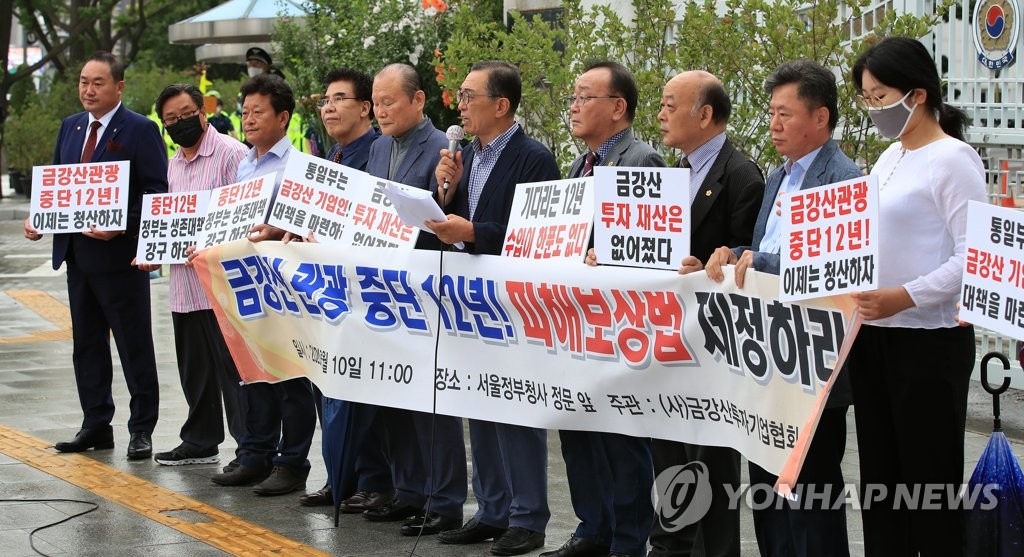 Launched in 1998, the Mount Kumgang tour project was regarded as a key symbol of inter-Korean reconciliation and economic cooperation. About 2 million people visited the mountain under the program.

The tours were abruptly suspended in 2008 after a South Korean tourist was shot dead near the resort for allegedly trespassing in an off-limits area.

The two Koreas have pushed to resume the tour program in recent years, but little progress has been made due to constraints posed by international sanctions. The outlook for its resumption have darkened further since October last year when North Korean leader Kim Jong-un demanded the South tear down all "unpleasant-looking" facilities it built at the resort, saying the country will build a new international tourist destination of its own.

South Korean businesses that joined in the tour program, including tour agencies and operators of stores and other facilities, have claimed that they have suffered a combined 2 trillion won (US$1.7 billion) in lost sales over the past 12 years since its suspension.

Biz people demand legislation to compensate for losses from tours to Mt. Kumgang

Biz people demand legislation to compensate for losses from tours to Mt. Kumgang