BUSAN, July 10 (Yonhap) -- Record levels of precipitation battered Busan on Friday, as more than 200 millimeters of rain fell on the southeast coast in the nation's second-largest city in a single day, local weather officials said.

According to the Korea Meteorological Administration's (KMA) Busan office, 203.7 mm of rain fell as of 1 p.m. in the port city's principal observation point in Jung Ward, the sixth-largest single-day volume recorded in the last two decades. 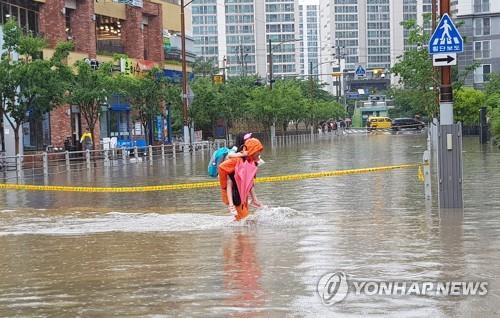 The city's central ward of Yeongdo received 250 mm of rain in one day, followed by 244 mm in North Port, 220 mm in Nam Ward and 143 in Haeundae, the KMA said. Yeongdo Ward was soaked by a maximum hourly precipitation of 79 mm, the ninth-largest figure over the past 20 years.

There has been no human injury caused by the extraordinarily heavy rain but 45 cases of flooded roads and buildings had been reported by noon, municipal authorities said, adding nearly 300 civil servants were on emergency standby.

"A large amount of water vapor was supplied from the south, causing heavy rain on the southern coast and Busan, in particular. Busan recorded the largest amount of precipitation nationwide," the KMA office said.

The office lifted its heavy rain warning for Busan as of 1:20 p.m. but said the city's strong wind advisory will remain in effect until late night.

It also said additional 5 to 20 mm of rain will fall in the afternoon, while winds are to get much stronger towards the evening.