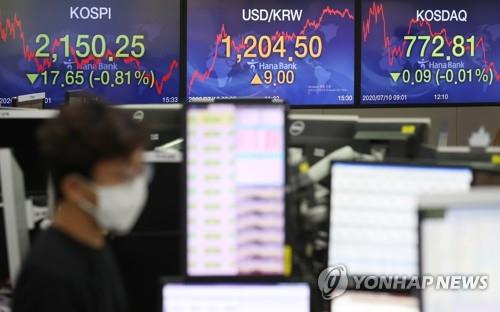 The index's fall came after daily COVID-19 cases in the United States topped 60,000 for the first time Thursday (U.S. time), with record deaths in the populated states of Florida and Texas.

"The rise in the U.S. infections also triggered the sell-off in the local trading," said Kiwoom Securities analyst Seo Sang-young, noting that the jump in U.S. cases has become steeper.

The figure marked a steady decline since Sunday when South Korea confirmed more than 60 cases for the third consecutive day, but health officials warned of cluster and imported infections on the rise.

Earlier in the day, the government limited regular flights from countries of high infection rates to 60 percent of their capacity.

The local currency closed at 1,204.5 won against the U.S. dollar, down 9 won from the previous session's close.