SEOUL, July 10 (Yonhap) -- In a retrial of a corruption and influence-peddling scandal that led to the ouster of ex-President Park Geun-hye in 2017, an appellate court slashed its prison sentence for the former head of state by 10 years to 20 years.

The Seoul High Court sentenced Park to 15 years in jail for bribery and an additional five years for abuse of power and other criminal charges.

She was also fined 18 billion won (US$15 million) and ordered to forfeit 3.5 billion won.

This compares with the combined 30-year prison term, 20 billion won in fines and forfeit of 2.7 billion won handed down by the appellate court in the two previous rulings in 2018 and 2019.

"Failing to fulfill the constitutional duty as the president and committing crimes, (Park) created a big mess in the running of state affairs," the court said, delivering the reduced ruling. "But the court took into account that she seems to have received little personal benefit and to almost have been declared politically bankrupt," according to the court.

Park was removed from presidency in March 2017, mired in a massive power abuse and corruption scandal. The official charges against her include conspiring with her longtime confidante, Choi Soon-sil, to force big conglomerates, such as Samsung and Lotte, to donate 77.4 billion won to two foundations under Choi's control.

She was also indicted on charges of accepting off-the-book funds worth 3.5 billion won from three former chiefs of the National Intelligence Service from May 2013 to September 2016 in collusion with her secretaries.

The retrial by the Seoul High Court on Friday follows the Supreme Court's decisions to send the two cases back to the appellate court for revisiting last year, ordering it to handle bribery charges separately from the rest of the charges.

The decision was based on the Public Official Election Law, which requires corruption charges raised against a public official to be ruled individually since a bribery conviction could later affect the convicted official's right to vote or run in elections.

The reduced prison term on Friday came after the top court cleared Park of an extortion charge raised over her alleged act of having conglomerates pay donations to the two Choi-controlled foundations. The top court ruled last year that Park's solicitation of the funds did not constitute "extortion."

As in previous court hearings and rulings, Park was not present at Friday's court ruling, as she has been boycotting all her trials. 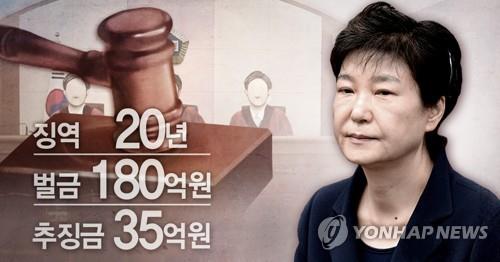