The body of Park, currently in the Seoul National University hospital, will be transferred to City Hall on Monday morning for the ceremony scheduled to start at 8:30 a.m., according to Rep. Park Hong-keun of the ruling Democratic Party, who co-heads the funeral preparation panel.

"It will take place online in line with the principle of cooperating with the COVID-19 control efforts and be held in a simple manner," the lawmaker told reporters.

The number of attendees will be limited to around 100, including bereaved family members, senior city officials, and representatives from the party and civic groups.

The ceremony, a part of the public funeral hosted by the Seoul metropolitan government, will be webcast live via the YouTube channels of the city government and its radio station, TBS. Park's body will then be moved to the crematorium of Seoul Memorial Park before being buried in his hometown of Changnyeong, South Gyeongsang Province. 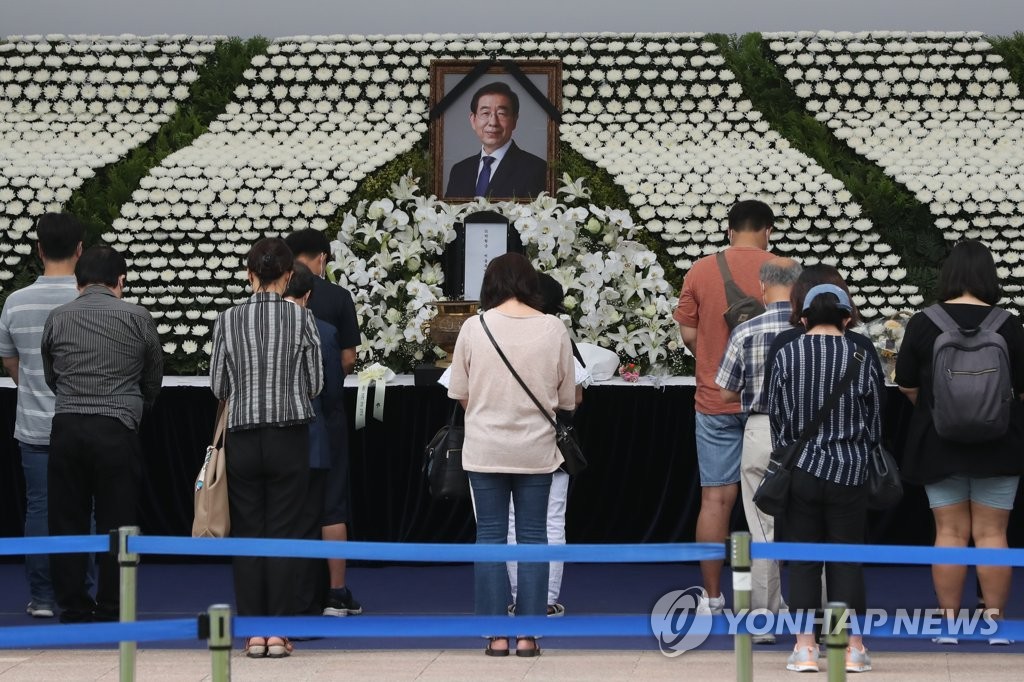 Meanwhile, a stream of people have visited a public mourning station set up in front of City Hall.

The number of people who visited the place to mourn his death was tallied at 11,486 as of 1 p.m. Sunday, according to city officials. More than 640,000 people laid virtual flowers at an online memorial, they added.

All visitors are required to wear masks and keep a sufficient distance from one another before and after entering the facility following temperature checks.

The three-term mayor, who was regarded as a potential presidential candidate, was found dead last week after being accused formally of sexually harassing his female former assistant.