SEOUL, July 13 (Yonhap) -- South Korea on Monday started to require foreigners arriving from high-risk countries to submit a certificate showing they tested negative for the new coronavirus, as a steady rise in imported cases has strained its anti-virus fight.

All foreign arrivals from the four countries -- Bangladesh, Pakistan, Kazakhstan, and Kyrgyzstan -- are obligated to hand in health certificates proving they have tested negative for COVID-19 on a polymerase chain reaction (PCR) test.

South Korea has also ordered regular flights from such countries to limit the number of passengers to 60 percent of capacity. Those who depart for countries with large outbreaks will face strict entry processes when returning to South Korea, health authorities said.

Strict quarantine regulations on arrivals from Pakistan and Bangladesh have been already in place. South Korea began to suspend visa issuance and non-scheduled flights from the two countries from June 23. 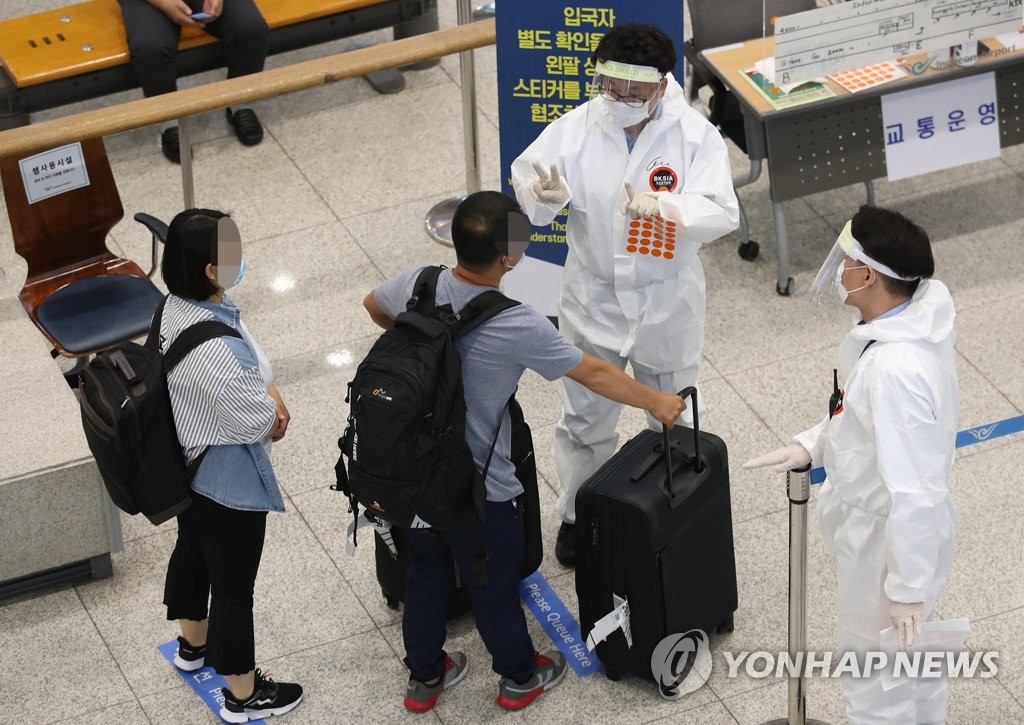 On Sunday, South Korea said that it is closely monitoring situations in 11 additional countries, hinting it may apply the strict regulation to more countries with large virus outbreaks down the road.

The certificates must be issued by hospitals and testing centers designated by South Korean embassies within 48 hours before their departure.

The virus-free certificates do not exempt the arrivals from the two-week self quarantine. South Korea has been enforcing mandatory 14-day self-quarantines for all travelers, including South Korean nationals, coming from overseas since April 1.

In early May, South Korea eased social distancing, but the steady rise in imported cases as well as those tied to religious facilities have forced health authorities to take a step back and reinforce anti-virus measures.

So far, foreign nationals account for nearly 30 percent of the total imported cases here, which came to 1,872 as of Monday.

South Korea has reported 288 imported cases this month as of Monday, compared with 323 cases detected for all of June. In May, the country reported 192 of such cases.

The country announced 43 more imported cases Monday, posting double-digit numbers for the 18th consecutive day. It marked the highest since March 25 when the reading was 51.