GENEVA, July 13 (Yonhap) -- South Korea's Trade Minister Yoo Myung-hee has said she will seek to transform the World Trade Organization (WTO) into a body capable of responding more properly to a changed trade climate if she is elected as new chief.

Yoo made the remarks as she arrived in Geneva on Sunday to participate in the three-day general council meeting at the WTO. She will announce campaign pledges for the top post of the body, which was launched as the final arbiter in trade disputes in 1995, during the meeting that starts Wednesday.

"I will stress the WTO's reform which is suitable to the 21st century, as it has failed to adjust to drastic changes in the world trade climate," Yoo said in an interview with Yonhap News Agency. "My slogan is to make the WTO more relevant, resilient and responsive."

She said there is a big gap between trade rules at the WTO's inception and actual trade today because no mobile phones or e-commerce existed at that time.

"If elected, I will try to reform and restore WTO's major functions, such as dispute settlements, in a way suitable to the current situation," Yoo said.

The WTO plans to launch the process to pick its new leader on Sept. 7 as current Director-General Roberto Azevedo of Brazil is set to stand down in August, about a year before his term ends.

Yoo, who declared her candidacy in late June, is competing for the top WTO post with other candidates from seven countries -- Mexico, Nigeria, Egypt, Moldova, Kenya, Saudi Arabia and Britain. 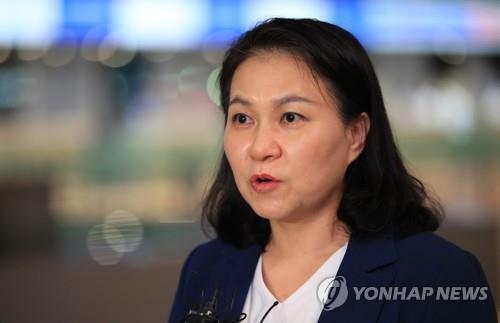 Her bid comes as the WTO is stuck in its biggest crisis since its creation over growing uncertainties in global trade rules and fragile collaboration among member nations, in the wake of the United States-China trade war and the coronavirus pandemic.

Yoo said she would step up efforts to enable the WTO to respond more quickly to a global crisis, such as the COVID-19 pandemic.

"Countries tend to impose export restrictions during crises, such as the coronavirus outbreak, but currently, the WTO is not prepared to deal with such a situation promptly," she said.

Yoo further said she would seek to ensure the WTO play a role in bolstering the capabilities of underdeveloped countries and supporting their recovery, as well as developed nations.

"Such a role is important for the sustainable development of all member countries. The WTO may not act as a trade arbiter in the future unless diverse voices are reflected in its trade agreements," she said.

Yoo, a veteran in trade talks, is expected to announce her campaign promises during a session of the general council meeting Thursday (local time).

To become the WTO's new head, she has to overcome the opposition of Japan that has been locking horns with South Korea over a Seoul court's ruling that ordered Japanese firms to compensate victims of their wartime forced labor.

Japan has reportedly joined hands with Germany, France and other European countries to throw their support behind Nigerian candidate Ngozi Okonjo-Iweala, who is more internationally known. 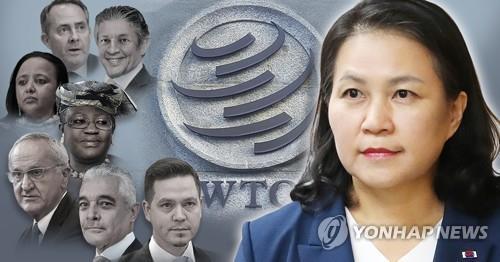