The result is based on Realmeter's survey of 2,515 eligible voters nationwide, conducted from July 6-10 at the request of the cable news-only channel YTN. The poll's margin of error is plus or minus 2 percentage points at the confidence level is 95 percent.

The latest figure marks a decline of 1.1 percentage points from the previous week and the lowest point since the third week of March when the number came to 49.3 percent.

It was also the seventh week in a row that Moon's approval rate has declined.

A total of 46.5 percent of the latest poll's respondents "negatively" assessed Moon's government operation, the highest reading since the third week of March's 47.9 percent.

Realmeter attributed the weekly decline to a number of simmering controversies on the government's real estate and North Korea policies as well as the state-run Incheon International Airport Corp.'s plan to grant regular employment status to subcontracted security guards.

"The stalemate in inter-Korean relations, the controversy over the Incheon International Airport Corp.'s employment plan, as well as (public) disappointment with the real estate policy continued to have a constant impact on the fall of the approval rating," according to Realmeter.

The research firm said the latest poll result, however, was little affected by the death of late Seoul Mayor Park Won-soon who apparently took his own life last Thursday and was found dead at a mountain in Seoul the next day.

A drop in Moon's approval rating was reported in all age groups in the latest survey, except voters in their 30s. The approval rating among those in their 30s, deemed Moon's core support base, jumped 8.4 percentage points, rebounding from a deep dive seen in the previous week, the poll showed. 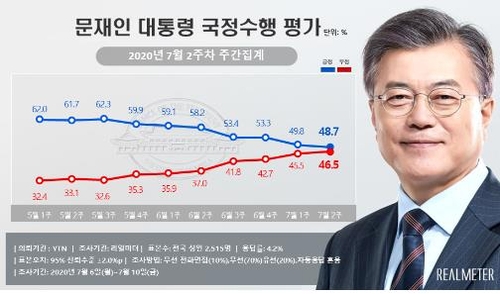