SEJONG, July 13 (Yonhap) -- The total value of unemployment benefits paid out in June set a new record due to the continuing negative impact of the coronavirus pandemic on the economy, data showed Monday.

The Ministry of Employment and Labor said the government paid out 1.1 trillion won (US$916 million) last month in unemployment, up by a whopping 62.9 percent from 428.7 billion won a year ago.

The figure has broken record after record since February when the COVID-19 pandemic started battering the economy and forcing businesses to fire employees to stay afloat.

Aside from the hike in the number of unemployed, the ministry attributed the rise to the revision to the relevant law, which took effect in October and allowed a rise in the amount of payments and an extension in the period under which benefits are offered.

The number of employment insurance subscribers in June came to 13.87 million, up by 184,000 people or 1.3 percent year-on-year. The growth rate of the figure has showed a downward trend since March. But it has turned upward again due to a rise in hiring in the public service sector, as the government has resumed various "contactless" public sector businesses and schools reopened nationwide in May.

The figure decreased by 2,000 in the lodging and restaurant businesses -- one of the hardest hit industries by the pandemic, under which strict social distancing is required and crowds should be avoided to stem the spread of the virus.

Also the manufacturing industry saw the number drop by 59,000, or 1.5 percent, to 3.52 million, the biggest decrease after the country suffered the Asian Financial Crisis in January 1998 when 99,500 people were pushed out of the insurance system. By sector, the automobile and electronic communication industries saw the number drop by 10,000 and 12,300, respectively.

By age group, people 29 and younger and people in their 30s turned out to be the hardest-hit groups with 61,000 and 59,000 in lost insurance compared with a year ago, an indicator for how tough the job market has become for the country's young job seekers. 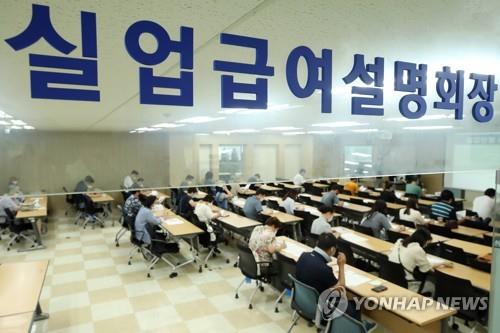