SEOUL, July 13 (Yonhap) -- The government has decided to bury late Korean War hero Paik Sun-yup at a national cemetery in the central city of Daejeon after consultations with his family, the defense ministry said Monday.

Paik, South Korea's first four-star general and most renowned war hero, died on Friday at age 99. He is credited for bravely leading key battles during the 1950-53 war and contributing greatly to the modernization of South Korea's armed forces.

His supporters blasted the government's decision to bury him at Daejeon National Cemetery, arguing that he should be buried at Seoul National Cemetery where former presidents, war heroes and other top patriots are laid to rest.

But detractors claim Paik doesn't even deserve burial at any national cemetery, let alone the Seoul cemetery, citing records that he served in a pro-Japanese military force and cracked down on Korean guerilla forces fighting for independence from Japan's 1910-45 colonial rule.

The defense ministry said that the Seoul cemetery is full.

"No vacant plot exists in the Seoul cemetery. Accordingly, related agencies, including the Ministry of Patriots and Veterans Affairs, had consultations with the bereaved family and decided to bury him at the Daejeon cemetery," deputy defense ministry spokesperson Col. Moon Hong-sik told a regular briefing.

During the Korean War, Paik successfully led several crucial battles. He is also widely credited for his role in the modernization of the South Korean military by taking key military posts, such as the commander of the Joint Chiefs of Staff, and the establishment of the Korea-U.S. alliance.

But Paik served at the pro-Japan Gando Special Force under the Manchukuo Imperial Army, a puppet state established by Japan in Manchuria, between 1943 and 1945. The special force launched operations to suppress Korean guerrillas fighting colonial Japan, and around 172 people, including civilians, were killed by the operations, according to government data.

Paik acknowledged that he served in the force but stressed that he did nothing to support Japan. 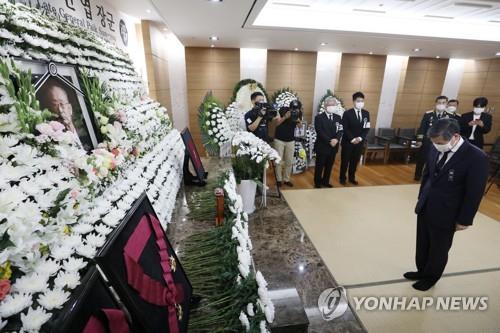