SEOUL, July 13 (Yonhap) -- A former secretary on Monday accused late Seoul Mayor Park Won-soon of sexually harassing her over a period of at least four years, calling for a transparent and just probe into the potential MeToo case.

"During the long hours of silence, I was in pain, alone ... To protect myself, so powerless and vulnerable against huge power, I wanted to guard myself through the protection of just and fair law," the former secretary said in a statement read out by civic group officials.

Officials at Korea Women's Hot Line and Korea Sexual Violence Relief Center, who held a press conference on behalf of the public servant, urged authorities to launch a "proper probe" into the case, which they labeled as typical workplace sexual abuse involving a gap in power.

Lee Mi-kyoung, who leads the relief center, stressed how the victim was "unable to decline or defy the mayor, as a secretary" and that her request for help fell through as most in the city government told her it must have been a "mistake" or that "it's part of a secretary's job to emotionally support the mayor."

Lee also questioned law enforcement, mentioning how the case was reported to Park as soon as the complaint was filed.

"Under such circumstances, who can trust the country's system and report power-based sexual abuse cases?" she asked. 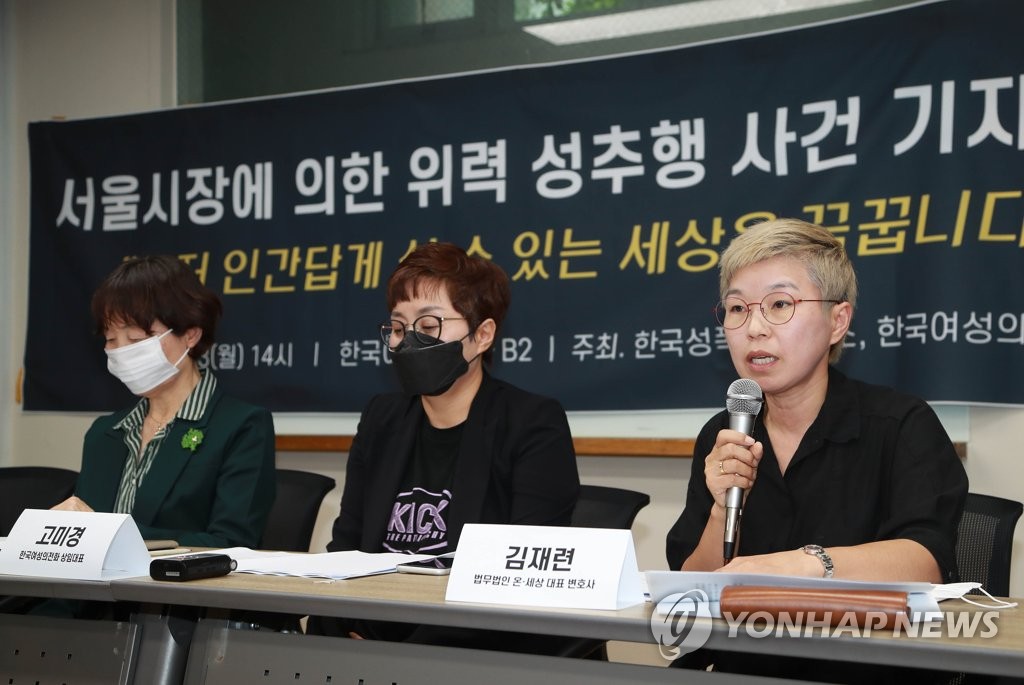 Kim Jae-ryun, a lawyer representing the victim, said the alleged impropriety, which mostly took place at the mayor's office and a connected bedroom, continued for more than four years, even after the victim was sent to another post within the government.

"While (we) cannot elaborate on the details, (he) approached close to the victim in the process of asking her to take a selfie together or put his lips on her bruised knee," Kim said, "(He) sexually abused the victim by making physical contact with her and asking her to 'hug' him and invited her to a secret Telegram chat room where he sent obscene texts or photos of himself only wearing his underwear."

Kim said her client had requested a transfer to another post following the alleged abuse and shared photos and texts from Park with her friends and colleagues. They have been submitted as evidence to law enforcement authorities, Kim added.

"I wanted to shout at him to not behave like this, within the safety of a court. I wanted to cry out that I'm in pain. I wanted to forgive. I wanted to receive a humane apology and be judged by law in South Korea, which is a law-governed country," she said in the statement announced on Monday.

"How should I live from now on. But I'm a human being. I'm a living human being. I hope to soundly recover the everyday life and safety of myself and my family," the former secretary said.