SEOUL, July 14 (Yonhap) -- The unification ministry said Tuesday that it could revoke the operation permits of two North Korean defector groups as early as this week over their sending of anti-Pyongyang propaganda leaflets.

The move comes about a month after North Korea blew up an inter-Korean liaison office in its border city of Kaesong in anger over leaflets criticizing leader Kim Jong-un, saying such leafleting violates a series of peace agreements between the two sides.

In response, South Korea's unification ministry pledged to crack down on leafleting, filed a criminal complaint against two defectors groups -- Fighters for a Free North Korea and Kuensaem -- and took steps to revoke their operation permits.

Late last month, the ministry held a closed-door hearing to give the groups one last chance to explain themselves before going ahead with the revocation process. Kuensaem officials attended the hearing, but Fighters for a Free North Korea did not send its representatives.

The ministry said that it has asked Fighters for a Free North Korea to submit its final say in written form by Wednesday. It plans to revoke their operation permits after the Wednesday deadline.

"The revocation decision could be made on the North Korean defector groups as early as this week," a ministry official told reporters on condition of anonymity.

Losing operation permits would make it hard for the groups to raise money for their operations and activities, as revocation would make them ineligible for various benefits available to registered organizations.

Sending leaflets across the border recently emerged as a major source of cross-border tensions since Pyongyang called it a violation of an inter-Korean summit agreement in 2018 and threatened to take a series of retaliatory steps against South Korea if it did stop such activity.

The government has advised against sending such leaflets, saying that such activity violates an inter-Korean exchange and cooperation act and that it also could jeopardize the safety of residents in border areas.

But they have ignored the appeal, citing their right to freedom of expression and emphasizing that their leafleting is aimed at providing information to people in the oppressive North Korean state.

Fighters for a Free North Korea, run by North Korean defector Park Sang-hak, and Kuensaem, run his younger brother Park Jung-oh, are among the most active groups in sending leaflets that criticize leader Kim Jong-un and his family.

According to the unification ministry, Kuensaem has tried to send plastic bottles containing rice, USBs, Bibles and other materials to North Korea eight times this year. Fighters for a Free North Korea claimed to send 500,000 leaflets, SD cards and $1 bills into the North via balloons last month.

In a Washington Post op-ed on Tuesday, Park Sang-hak criticized the Seoul government over its move to revoke the operation permits of the groups run by him and his brother, saying, "The truth is what the Kim dynasty is most afraid of."

The unification ministry official said the right to freedom of expression and provision of information to the North Korean people by sending leaflets should be exercised in a way that does not heighten cross-border tensions and undermine the safety of people living along the border area. 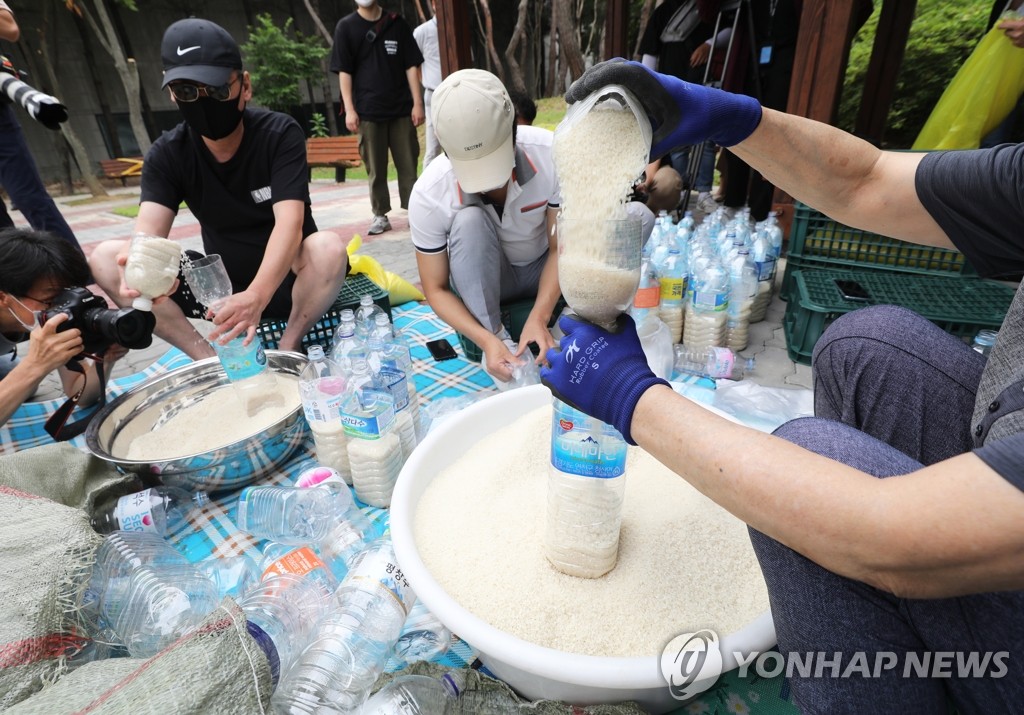