SEOUL, July 14 (Yonhap) -- A Seoul court on Tuesday approved pre-trial detention of the chief executive officer of an asset management company as part of a probe into his alleged involvement in a massive hedge fund scandal.

The Seoul Southern District Court issued the warrant to detain Won Jong-jun, head of Seoul-based fund operator Lime Asset Management Co., over his alleged involvement in the firm's cover-up of massive losses and subsequent suspension of fund redemption worth an estimated 1.6 trillion won (US$1.3 billion).

Issuing the warrant, the court cited the risk that Won may try to flee or tamper with evidence.

The court, however rejected the pre-trial detention warrant for Lime Asset's top marketing official, identified only as Lee, on the same charges. 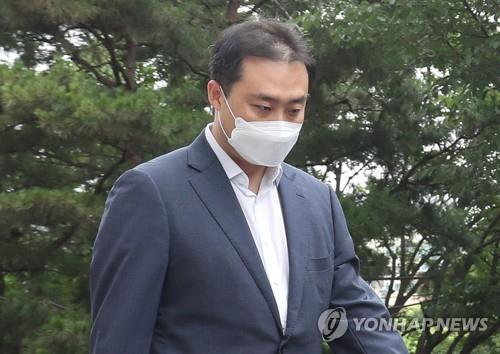 Won and Lee have been accused of deceiving investors into putting a total of 200 billion won into 18 trade finance funds operated by Lime Asset, though the money was actually intended to be used to redeem the company's existing funds.

In seeking arrest warrants for Won and Lee last Friday, prosecutors applied charges of fraud and capital market law violation to the two.

Lime Asset investors filed criminal complaints against Won and Lee in March, arguing they had suffered huge losses after investing in Lime Asset's trade finance funds due to the company's deceptive fundraising.

Founded in 2012 as an investment adviser, Lime Asset was granted a license to operate private funds in 2015. The company was managing a record high of 5.7 trillion won as of June last year. In October, however, the company froze withdrawals, citing an inability to liquidate enough assets to meet the redemption requests, prompting the nation's financial watchdog to conduct a probe and conclude the company duped investors by concealing losses and continuing sales of related products.