SEOUL, July 14 (Yonhap) -- Low-cost carrier Jin Air Co. said Tuesday it will resume its flights to the Chinese city of Xian, about six months after suspending them due to the new coronavirus outbreak.

A 189-seat B737-800 is set to depart Thursday from South Korea's southern resort island of Jeju at 8:30 a.m. in the resumption of a weekly flight to Xian.

Jin Air stopped its flights to Xian on Jan. 30 following the outbreak of the COVID-19 pandemic from China late last year.

Jin Air had suspended all of its international flights since April, as countries strengthened entry restrictions on incoming passengers to stem the spread of the new coronavirus. 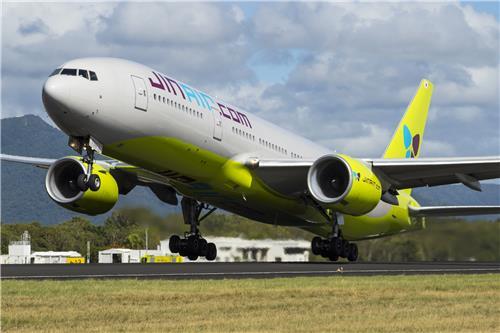 In June, Jin Air restarted flight services on routes from Incheon to Bangkok, Hanoi, Taipei, Narita and Osaka to bring overseas Koreans, those studying abroad and businessmen to the country.

Seven domestic routes have been in service despite the virus outbreak.

The carrier offered flights on 32 international routes to places that include Guam, Hawaii, Shanghai and Hong Kong before the COVID-19 pandemic hit the airline industry.

Jin Air to resume flight to Chinese city of Xian

Jin Air to resume flight to Chinese city of Xian