He was unveiling the blueprint of his administration's new signature policy drive to help overcome the COVID-19 pandemic and prepare for the post-coronavirus era.

"The government promises an unprecedented (scale of) investment in the Korean version of the New Deal," he said in a keynote speech at the Cheong Wa Dae event to make public some details of the project. "It will directly invest 114 trillion won of state funds (into the project) by 2025," he said, adding that the total investment will hit 160 trillion won when spending by the private sector and local governments are included.

He predicted that 1.9 million jobs will be created by the year. 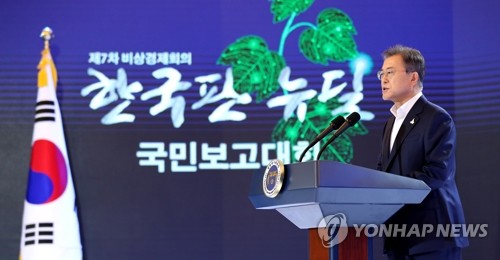 By 2022, when the president's five-year term finishes, his administration plans to spend 49 trillion won to create 890,000 jobs.

"I hope the Korean-version New Deal will be a new opportunity for those who need jobs," Moon said.

He described it as the "declaration of the Republic of Korea's grand transformation to take a leap to a pacesetting nation."

"It represents the government's strong will to fundamentally change the Republic of Korea," Moon said, using the official name of the country.